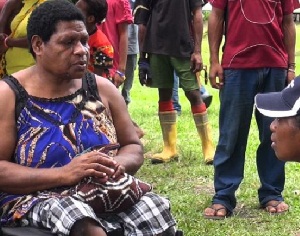 Paralympian Anitha Hamambi will be the flag bearer for Team East Sepik at the 6th BSP PNG Games in Lae, which begins this Sunday.

Anitha won two gold medals and a bronze medal for East Sepik at the 2012 PNG Games in Kokopo. She is confident and looks forward to rake in more medals for Team East Sepik in this year’s PNG Games.

Anitha Hamambi is from Kubalia in Yangoru, East Sepik Province. Despite being bound to a wheelchair for most of her life, she is a champion Paralympian.

She represented East Sepik Province in the last three PNG Games in Lae, Port Moresby, and Kokopo in 2012.

Anitha’s story gives hope to people living with disabilities. It is a story of how a person can actively participate in sports and add value to the community and lives despite the limitations that come with disabilities.

Her challenge is for other disabled people to take on the challenge and face their greatest obstacles.

Athletes Village Catering By The Numbers