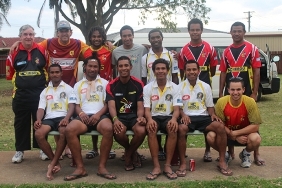 The supplementary Immunization Activity (SIA) implemented by the National Department of Health in April and May this year reached approximately 88 per cent children with a total number of 553,872 with the measles vaccination.

The campaign reached 1.2 million girls and women at ages 15-45 years.

The 2012 Measles SIA was integrated with Tetanus Toxoid and other routine EPI activities.  This meant all routine vaccines were administered including Vitamin A and Albendazole.

The SIA was supported by AusAID, World Health Organization and UNICEF among other development partners and many partners in the civil society.

The Department is now conducting a month-long integrated maternal and child health activities which started from 15 October and will end on November 15.

This is to boost immunization of children and girls and women, 15-45 years and other routine services.

The routine measles immunization coverage in recent times and subsequence Supplementary Immunization Activities (SIA) has led to a decline in measles outbreaks in the country.

PNG has shown that steady investment to ensure young children survive is achievable.

Reaching many girls and women during the SIA also means that many children born to the future mothers have more chance to survive tetanus.

Meantime, the World Health Organization estimates that measles causes more than three thousand deaths each year in PNG. The routine immunization services are not reaching every child in Papua New Guinea.

Committing to Child Survival: A Promise Renewed is a global movement to accelerate action on maternal, newborn and child survival and build on progress since 1990. More than 100 governments including PNG have since June renewed their commitment to child survival.