The Minister for Mining, Byron Chan, says that the long-awaited amendments to Papua New Guinea’s Mining Act are ‘complete’. But, he tells Business Advantage PNG, there are still some contentious issues.

Byron Chan says there has already been considerable work on the revisions to the 1992 Mining Act. ‘Everything is complete, it’s done. My department over the last nine years of consultation has come out with something pretty good and pretty modern.

‘Those amendments are there ready for any government to enforce, or to take up. I suppose you have to have the will to do it.

‘It has been quite a struggle to maintain the status quo.’

‘There are some issues there that are maybe a bit controversial. It is to do with equity, and the compulsory acquisition increase (in) governments’ equity over the next 25 years of the mine life,’ he told Business Advantage PNG recently.

‘Those major issues are concerns at this time which we could not really attend to right now, so the PM has deferred the matter to later.’

Chan says ‘it has been quite a struggle to maintain the status quo’ during his tenure as Mining Minister. He expresses his appreciation to landowners ‘and other associations’ for their understanding.

‘It is reason to be optimistic about the mineral sector. Over the last 9 months of 2016, we have had a total of 560 applications for tenements’

‘This government, over the last several years, has dealt with landowner problems and associations and mining problems through the memorandum of agreements (MOAs). That was a way forward for us. Our people were pretty content for us to address these issues through the MOA discussions.

‘It is something that maybe previous governments did not attend to, which led to a lot of shut-downs. This government, under my ministry, has been very lucky that people have been very constructive in their approach towards getting what they want.’

Chan believes that, despite a period of low commodity and minerals prices, investor interest remains strong. ‘It is time for some good news, now and into the medium term and maybe into the long term future.’

Speaking at the PNG Mining conference in December 2016, Chan said mining production in PNG improved in 2016, pointing to an increased number of mining leases and a resurgence in the number of exploration tenements. 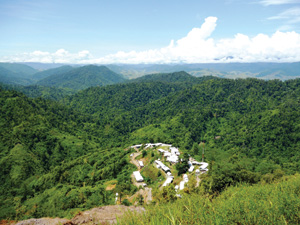 ‘It is reason to be optimistic about the mineral sector. Over the last 9 months of 2016, we have had a total of 560 applications for tenements.

‘Out of these tenements 338 are active, 61 are in the renewal process, and 161 are new (operations). So there hasn’t been a significant downturn in exploration.’

Chan says the special mining lease applications for the Frieda River and Wafi Golpu mines also indicate there is a resurgence in interest in mining in PNG.

‘We anticipate that the required statutory technical assessments required under the Mining Act will be completed by the second quarter of 2017.’

Chan says several key mines have enjoyed increased production and revenue in 2016. ‘Lihir, our largest producer, is projected to be up a whopping 38 per cent on revenues, against 2015. (In 2016) Porgera is up 17 per cent; Ok Tedi 36 per cent; Hidden Valley 33 per cent; Simberi 20 per cent.

‘We project that mineral exports will contribute just over K9 billion for 2016.’

‘Unless there are price falls in our key minerals of gold, silver, nickel and copper, this level of production and revenue is expected to continue to rise over the next 10 years.’

Chan says there has also been strong growth in the alluvial mining sector. ‘The last few years we have seen an increase in applications for alluvial mining leases and efforts are being made to properly regulate this sector.

‘All PNG needs to do is create a business and social environment conducive for investment.’

‘It is estimated that total income from alluvials from 2016 will exceed K330 million.’

Production from alluvial mining has been uneven. Chan says in 2008 the export value of alluvial gold exports was K180 million. By 2014 it was up to K373 million but it fell to K356 million in 2015 and it is expected to be lower again in 2016 at K311 million. The average over the eight year period has been K300 million.

‘It will continue to contribute significantly to the country’s economy. All PNG needs to do is create a business and social environment conducive for investment.’

Chan adds that PNG’s ‘own scientists’ are currently conducting exploration studies on coal, geothermal and strategic minerals, such as rare earth elements.

‘These resources will open new opportunities in the energy sectors. Policy documents are also being drafted by relevant government organisations to provide the guidelines for exploiting these resources.’

Raised for meat in South Korea, dogs head for new homes in U.S.