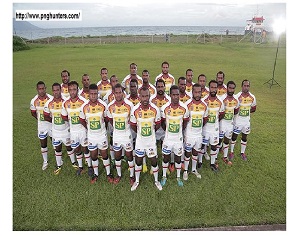 The SP PNG Hunters have named their squad, for trials against the Ipswich Jets at the North Ipswich Reserve, Ipswich, Queensland, Australia.

The match will be played this Saturday, 21 February, 2015; and are currently hard at training, and preparing for the game, this weekend.

This match will be the only pre-season trial for the SP PNG Hunters.

Wartovo Puara and Thompson Teteh will re-join the team for the trials, after returning from their six weeks training stint with the South Sydney Rabbitohs.

The SP Hunters have named a 21-men’squad, that will be further trimmed down to 18, for this year’s season.

Several players of the SP Hunters have been excluded, due to surgery, and injuries sustained from last year’s season.

Head Coach, Michael Marum says, they are making sure the majority of the players are fit and ready to begin the season.

The squad training is an opportunity for the boys to step up and perform to get a spot in the 18-men’squad, after the cut down from 21, after the trials and before their first game against the South Logan Magpies in Brisbane, three weeks from now.

Marum stated that it was good to have Puara and Teteh back, as a bonus to strengthen the team.

He added that he hopes their experience has made them to be, even better players.