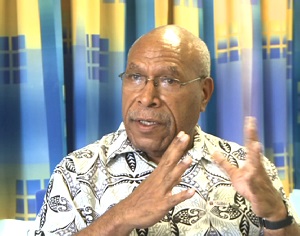 Director for the National Research Institute (NRI), Dr Thomas Webster says the Prime Minister was warned that the framework established to implement the SABL recommendations was not going to work.

Individuals who are implicated in the SABL controversy should not have been given the job of fixing the problem.

Dr Webster was responding to comments made by Prime Minister O’Neill yesterday. The set-up Dr Webster is referring to is the Ministerial Committee that was put in place to implement the recommendations of the SABL Commission of Inquiry.

He said department heads and ministerial head, who were involved in issuing the leases in the first place, were then tasked to implement the recommendations. He described this set-up as “defunct.”

Yesterday the Prime Minister said the delay in implementing the recommendations was because the bureaucracy was not responding to political directions.

Prime Minister O’Neill said his Cabinet is as frustrated with the delay as everyone else.

The Special Aaaaagriculture Business Leases became a national and an international issue when it was uncovered that over 5.2 million hectares of customary land were converted to agricultural business leases without the knowledge and consent of customary landowners.

An investigation at a cost of K15 million was completed last year and people are still waiting for the recommendations to be implemented.

Dr Webster said he hopes the committee that will monitor the implementation next year is made up of experts who have sound knowledge of Papua New Guinea’s land issues. He said in August this year, he wrote to the Prime Minister outlining these issues and offered the NRI’s assistance.  However he is still to receive an acknowledgement of this letter.

The reason Dr Webster made contact with the Prime Minister on this issue in August was because NRI was receiving information that groups whose SABL was found to be fraudulent were now trying to bring these leases under a new lease.

Civil Society groups who have been following the SABL issue share similar sentiments.  Executive Director of the Eco Forestry Forum, Thomas Paka, said the delay in implementing these recommendations is taking an unnecessary toll on the customary landowners. Some customary landowners are now looking at legal avenues that are costing them a lot of money to rectify the issue.

Driver In Highway Tragedy in Hiding