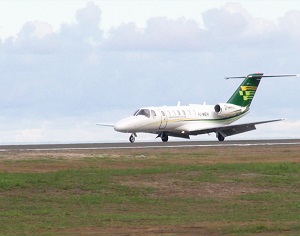 The National Airports Corporation (NAC) has issued a warning to all airline companies operating within Papua New Guinea to abide by the aviation laws.

The NAC issued this warning, following the illegal landing of a Tropicair aircraft last Thursday at Aropa, Kieta, in the Autonomous Region of Bougainville.

The airport was closed by NAC at the time the landing occurred, a day before its commissioning last Friday, as contractors were still working on the airport.

The aircraft flown by two pilots carried two passengers – both Digicel employees – on their way to Arawa to fix Bank South Pacific equipment.

The pilot who was questioned on the landing said he was unaware of the airport’s closure.

Chief Operating Officer Sylvester Kenatsi told EM TV News the pilots are well aware of the laws but sneak up and down to non-operational airports.

Mr Kenatsi said the matter has been raised with regulator Civil Aviation Safety Authority (CASA), and legal process will proceed.

If found to be negligent, the airline and pilots will be fined, convicted or will even have their operating license withdrawn.

PNG and Korea ventures into new business in mining industry