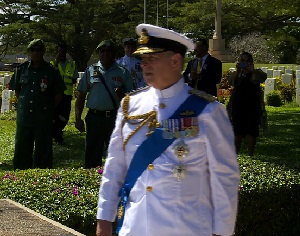 Prince Andrew, the Duke of York visited the Bomana War Cemetery in Port Moresby this morning, where he officiated in a wreath laying ceremony.

His Royal Highness was accompanied during the ceremony by Defence Minister Fabian Pok and PNGDF Commander Gilbert Toropo.

After a short speech, Prince Andrew was invited to lay a wreath to remember the lives that were lost during World War II.

He later inspected the head stones at the cemetery and toured the grounds prior to his departure.

Prince Andrew will be meeting with a number of government officials including PNG Governor General, Sir Michael Ogio, this afternoon.