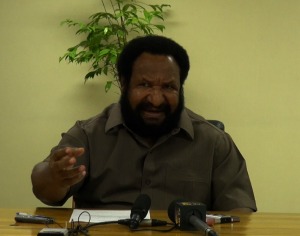 Leader of Opposition, Don Polye, has called on the Prime Minister to do up a supplementary budget for preparations to begin on the international events that will take place in Papua New Guinea.

In a media conference this afternoon, Mr Polye said the Government is not doing enough to prepare for the 2015 Pacific Games, the 2018 APEC Summit and now the 2016 FIFA U-20 Women’s World Cup.

He said the planning of these events must be made known to the public for transparency.

At the media conference, the Leader of Opposition, Don Polye, firstly commended the Government for its willingness to host the upcoming regional and international events in PNG.

Mr. Polye, however, expressed concerns about the preparation towards the staging of these events.

He said the government must look at the current economic status and do up a supplementary budget for preparation.

When contacted, the Office of the Prime Minister said Jackson’s International Airport is currently undergoing an expansion that will be ready for the Pacific Games.

Additional assessments are underway to determine the capacity requirements for the APEC Summit in November 2018.

The Office of the Prime Minister added that if the Opposition Leader requires information on infrastructure capacity, he is welcome to simply ask the Government.

WHO Says PNG May Not Acheive MDG by Deadline