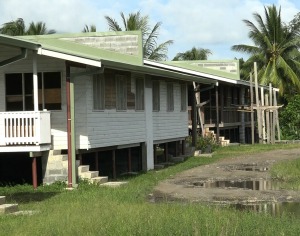 Documentation for the seven incomplete police houses at Lae’s Bumbu Police Barracks have already been finalised and are awaiting approval from the Police Commissioner, Gari Baki.

ACP for Northern Region, Peter Guinness, said the ACP support services at the Police Headquarters’ are waiting for the Commissioner to sign the documen’s before work can begin.

Guiness also said they are awaiting approval from the Police Commissioner before work on incomplete houses at Bumbu Barracks can start.

Currently, the Police Commissioner is out of the country and is expected to return in a week’s time.

These seven incomplete duplexes are a part of the Bumbu Police Barracks Housing Program in Lae that began in 2012. It costs K2.5million.

The project was meant to ease the housing problem faced by the constabulary. The houses were supposed to be completed in the middle of 2014.

However, into the fourth year and the seven duplexes’ remain incomplete.

As part of the ACP Northern Region, Peter Guiness has the Divisional Strategic Plan housing on the top of the priority list.

There are also incomplete houses and other buildings, from different projects sponsored by both police and other stakeholders but were not completed; including the Regional Training Centre.

Businessman Claims To Have Title Over Angau’s Allotment