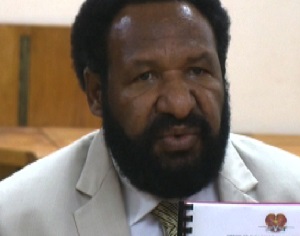 The Opposition has filed a motion on the Vote of No Confidence.

It is now before the deputy speaker of Parliament, Aide Ganasi, and the Parliamentary Committee to deliberate on.

It is expected to be announced on the floor of Parliament next week.

The Opposition still remains committed to its plans for a vote of no confidence.

They made an announcement after Parliament, that the motion on the vote of no confidence was compiled and presented to Deputy Speaker Aide Ganasi.

While withholding specific details, Polye revealed that members of the government have also signed the motion.

The motion outlines reasons behind the opposition’s move to give a clear understanding to the deliberating committee.

Other members of the Opposition have also thrown their support for the motion.

Vanimo Green MP, Belden Namah, maintains the reasons captured in the motion calls for a change in the government.

Prime Minister, Peter O’Neill, has described the Opposition’s motion for a vote of no confidence, as ‘desperate and ambitious’, and ‘not done in the best interest of the nation, but for personal interest driven by a desire for revenge’.

He says, the country today faces huge challenges with El Niño and global economic conditions which require the Parliament’s attention.

He said the 2016 budget will be presented next week, and should focusshould be on that, and not Somare and Polye’s ambition to return to Government.

He called on the country to compare what the current administration has achieved in the last three years, as opposed to what the previous government had done from 2002 to 2011.

The Opposition expects the motion to be announced on the floor of parliament in the coming weeks.

The announcement on the floor of Parliament will begin the process of the vote of no confidence.