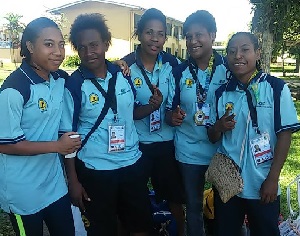 A new record has been set by the NCD boxing team at the recent BSP 6th PNG games in Lae, by winning 6 gold medals.

NCD boxing head coach, Mark Keto is pleased with the improvement and impressed with the performances of the boxers at the PNG Games.

The boxing team from the nation’s capital who participated at the games in Lae were mostly debutants; the youngest boxer in the team being just 15 years of age with the oldest being 24, but despite their age, proved to be a combined force to be reckoned with.

Motivated by the faith instilled in each of them by head coach, Mark Keto, the boxers fought hard and strong for ultimate recognition with strong competition from sister-province Central and the Autonomous Region of Bougainville, among others; the young boxers remained confident in their aim to win more medals, than previous games.

The boxers that have won gold will now join the national squad in preparation for the National Championships in Goroka, Eastern Highlands.

The National Championship will be held early next year, and will be the qualifier boxers to the 2015 Pacific Games.