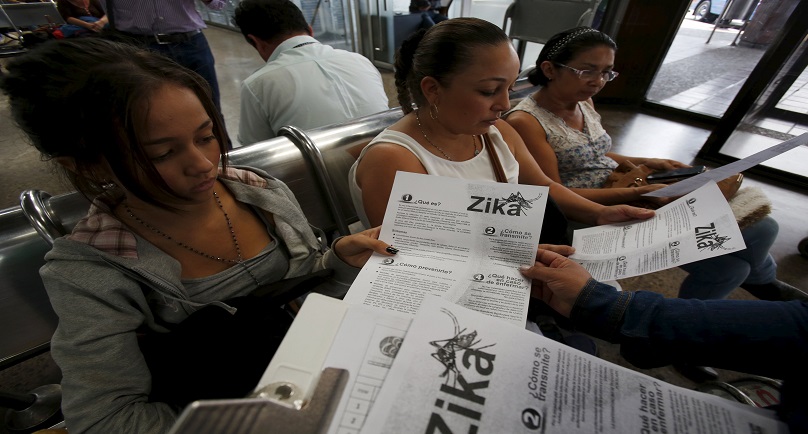 Image: Colombian women listen as a health worker distributes information how to prevent the spread of the Zika virus, at the transport terminal in Bogota, Colombia January 31, 2016. REUTERS/John Vizcaino

BOGOTA (Reuters) – More than 5,000 pregnant Colombian women are infected with the mosquito-borne Zika virus, the country’s national health institute said on Saturday, as the disease continues its rapid spread across the Americas.

Cases of the virus total 31,555, the institute said in a epidemiology bulletin, among them 5,013 pregnant women.

Zika, which has spread to more than 30 countries, has been linked to birth defect microcephaly and to neurological disease Guillain-Barre syndrome.

Total reported Zika cases increased by 23 percent over last week’s figures, while the number of pregnant women with the virus was up 57.8 percent.

Much remains unknown about Zika, including whether the virus actually causes microcephaly.

Brazil is investigating the potential link between Zika infections and more than 4,300 suspected cases of the birth defect, a condition marked by abnormally small head size that can result in developmental problems.

There are so far no recorded cases of Zika-linked microcephaly in Colombia, the government has said. Officials are still examining figures from countries such as Brazil, but say Colombia can expect between 500 and 600 cases this year.

There is no vaccine or treatment for Zika, which causes mild fever, rash and red eyes. An estimated 80 percent of people infected have no symptoms.

The institute said 29.4 percent of pregnant women with Zika live in Norte de Santander province, along the eastern border with Venezuela.

Colombia’s Caribbean region, which includes popular tourist destinations Cartagena and Santa Marta, had more than 12,488 cases of the virus, the bulletin showed.

The government has said pregnant women with Zika are eligible to access much-restricted abortion services. Many women struggle to find abortion providers even when they meet strict legal requirements and illegal abortions are widespread.

One Bogota abortion clinic said several women with Zika had come for consultations, but would not confirm if procedures took place. Local media reported what they said was the first abortion in the country because of Zika last week.

Colombian authorities have urged women to delay pregnancy for six to eight months.

The World Health Organization estimates Zika could eventually affect as many as 4 million people. Colombia expects up to 600,000 cases this year.

The health minister has said he believes three deaths are connected with Zika.