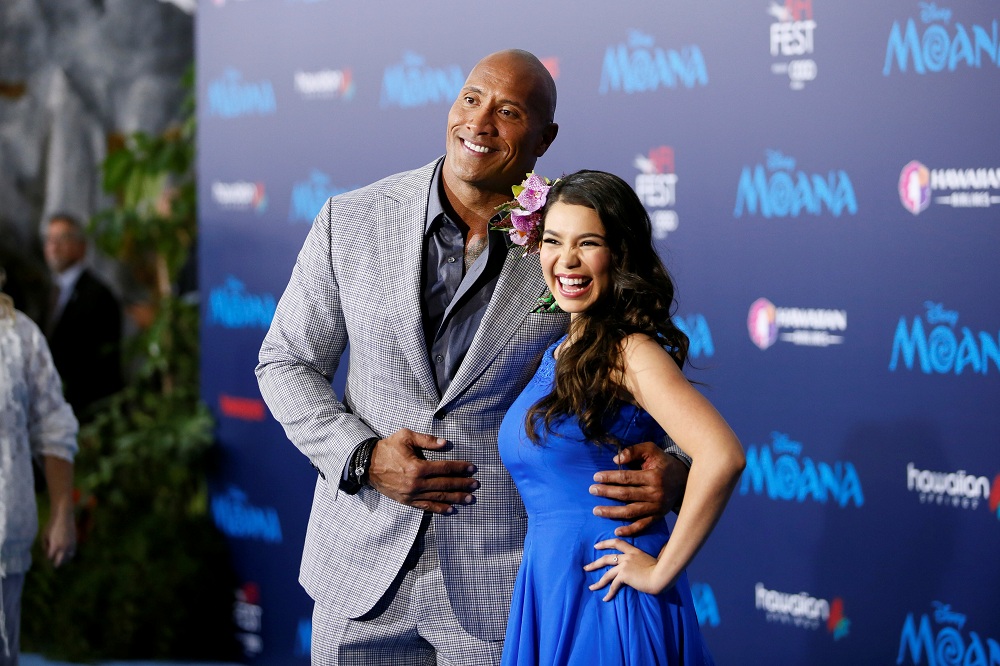 LOS ANGELES, (Variety.com) – Disney’s “Moana” sailed to the top of the Thanksgiving box office, earning a mighty $81.1 million over the five day holiday period and $55.5 million for the weekend.

Its success builds on the studio’s hot streak. Disney has released five of the year’s ten highest grossing films, is the leader in terms of market share, and is poised to set a new record for annual grosses. Its hits include “Captain America: Civil War,” “Zootopia,” “Doctor Strange,” “Finding Dory,” “The Jungle Book,” and now “Moana,” with “Rogue One: A Star Wars Story” waiting in the wings.

Disney distribution chief Dave Hollis said that the success of “Moana” and others like it justified the company’s decision to make fewer films, while taking bigger bets. Part of that strategy involved shelling out billions of dollars to buy Pixar, Marvel, and LucasFilm, the brands behind “Toy Story,” “The Avengers,” and “Star Wars.”

“We are working with the greatest brands and we’re doing big, broad storytelling that resonates domestically, but has the power to transcend borders and languages and cultures around the world,” said Hollis.

While “Moana” thrived, other new releases weren’t as fortunate. Paramount’s “Allied” earned $18 million over the five-day period and $13 million for the weekend, a weak result given its $85 million budget. The film stars Brad Pitt and Marion Cotillard as spies who marry only to have their love affair become entangled in a larger conspiracy. Robert Zemeckis (“Flight”) directed the picture.

Pitt has gone through a bruising divorce from Angelina Jolie that limited his participation in publicizing the film. The actor didn’t do television interviews or magazine spreads, which might have helped raise “Allied’s” profile.

The film also drew a much older crowd, with 39% of ticket-buyers coming in over the age of 50. Paramount suggested that might mean that its core group of ticket buyers may be slower to embrace the picture, even as it acknowledged that the results were disappointing.

“It’s just okay, and over Thanksgiving you always hope for something a little better than okay,” said Megan Colligan, Paramount’s head of marketing and distribution. “The bright spot is that there’s not a lot of competition in the marketplace over the next few weeks and our audience takes a minute to get to the theater.” Paramount is coming off a series of bruising failures such as “Teenage Mutant Ninja Turtles: Out of the Shadows” and “Zoolander 2.” As its parent company, Viacom, prepares to merge with CBS, there are questions about studio chief Brad Grey’s leadership of Paramount. Last month, Grey hosted a preview of the studio’s film slate for media, during which “Allied” was positioned as a key component in Paramount’s revival. The studio did enjoy a hit with “Arrival,” a brainy sci-fi thriller, but after “Allied’s” struggles, it will now have to look to “Fences” and “Silence,” two awards hopefuls from Denzel Washington and Martin Scorsese, to close out the year on a high note.

Broad Green and Miramax’s “Bad Santa 2” also failed to ignite. The follow-up to the 2003 cult comedy “Bad Santa” earned $9 million over the five day stretch and $6.1 million for the weekend. It cost $25 million to produce and had been tracking to open in the mid-teen millions. Broad Green, a newcomer to film distribution, has also been floundering of late. It has released a number of flops and disappointments such as “The Infiltrator,” a thriller with Bryan Cranston, and “99 Homes,” a drama with Andrew Garfield, and has only had one true breakout hit with “A Walk in the Woods,” a Robert Redford comedy that debuted last year.

Warren Beatty’s “Rules Don’t Apply” was roundly rejected by moviegoers. The romantic comedy about Howard Hughes bombed, earning a disastrous $2.2 million over five days and $1.6 million over the weekend. Beatty hasn’t been on screens in more than a decade and has spent years trying to assemble financing for the film. Hughes, the famously reclusive billionaire was something of an obsession for the actor. To realize the passion projection, Beatty tapped a network of one-percenters that includes Steve Bing, Steven Mnuchin, and Ron Burkle to pull together “Rules Don’t Apply’s” $25 million budget. Fox is distributing the picture. Its opening is one of the worst ever recorded for a movie that debuted on more than 2,000 screens.

“Moana” centers on a girl in the Pacific Islands who journeys across the ocean to save her people. Disney did not release a budget, but most animated films cost between $150 million to $200 million to produce. “Moana” now ranks as the second biggest Thanksgiving debut ever, behind only “Frozen,” which made $93.6 million in its first five days.

As many new releases floundered, Warner Bros.’ “Fantastic Beasts and Where to Find Them” continued to draw crowds. The Harry Potter spin-off picked up $65.8 million for the five-day period and $45.1 million in its sophomore weekend. The fantasy adventure has earned $156.2 million in two weeks of release.

In limited release, EuropaCorp’s “Miss Sloane” bowed in three theaters where it made $63,000, for a per-screen average of $21,000. Jessica Chastain stars in the thriller as a driven lobbyist who takes on the gun industry.

The Weinstein Company’s “Lion,” a drama about a man who uses Google Earth to reunite with his long-lost family, debuted to $128,368 in four theaters for a $32,092 per-screen average.

“Lion” is seen as a potential Oscar winner. One of its chief competitors, Amazon and Roadside’s “Manchester by the Sea,” expanded from four to 48 screens this weekend, where it earned $1.3 million. The drama about a grieving janitor has made $1.6 million since it opened.