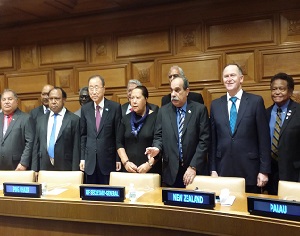 Minister Pato stressed the need for United States’ backing at the 21st Conference of Parties (COP21) to be held in Paris in November, where PIF leaders will bring up for discussion climate issues and the severity of its impact on Pacific communities.

The powerful nation responded, saying it is aware of the threat brought about by climate change and extreme weather behaviour in the Pacific.

Assistant Secretary Russell expressed his concern at the devastation caused by tropical storms in Samoa, Solomon Islands and Vanuatu and highlighted the need for concerted efforts at all levels to assist small island countries in mitigation and resilience efforts.

Assistant Secretary Russell and his team received a briefing on the Pacific Regionalism framework endorsed by the recent PIF Leaders’ meet in PNG which touches on areas of concern and aspirations of the people of the Pacific, such as fisheries, climate change, cervical cancer and West Papua.

Assistant Secretary Russell told the delegation, that whilst the US Administration wished to do more, the political dynamics in Washington does not always help the Administration’s desire in this regard.

However, he adds that the United States is a Pacific State and appreciates the need for solidarity with the PIF countries in advancing issues of common concern.

On the nuclear weapons issue, Pacific Leaders have urged the United States to ratify the Treaty of Rarotonga as well as find just solutions for the people of Marshall Islands as a consequence of nuclear tests in the region.

Assistant Secretary Russell congratulated Papua New Guinea for successfully hosting the 45th PIF Forum, and a copy of the PIF Leaders Joint-Communique was given to the United States contingent.

While in New York to attend the United Nations General Assembly Meeting, Minister Pato also chaired a meeting between the Pacific Island Forum Leaders with the Secretary-General of the United Nations, H E Mr Ban ki-moon.

Family homeless after eviction by Police