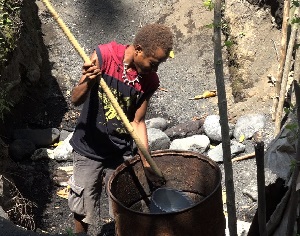 The Prime Minister Peter O’Neil is disappointed with authorities in Madang for moving too slow since the Manam Volcano’s minor eruption two weeks ago.

He ordered the release of K250,000 for the Manam relief operations yesterday, with another K300,000 to be released by Treasury later this year.

He has also issued directions for the Morobe Provincial Disaster Operations team, headed by Charlie Masange, to lead a team to Madang and assist the Madang authorities in coordinating the on the ground relief operations.

Back on Manam Island, those affected by the volcano are going through the first phase of hunger, as a result of ongoing ash falls which have affecting their food and water sources.

The fruits and nuts they’ve been surviving on have run out and the remaining water wells are drying up, because of the current drought-like conditions.

The people are turning to the sea for both food and water, but the ongoing ash falls are also contaminating the sea around them.

Casualties on the island so far include a grade six student struck down by rocks thrown out by the volcano, and four babies affected by the ash fall and other illnesses.

The health centre on the island cannot admit its patients, as its tanks have run out of water.

Chief Secretary, Sir Manasupe Zurenuoc is urging the Manam Islanders to remain at the care centres, because it is costing the government money for relief, even after they were warned not to go back.

However, the Manam leaders say that they’ve been facing many problems at the care centres, and are appealing to the government on behalf of their people to pass the Manam Resettlement Authority Bill, so that resettlement can happen.