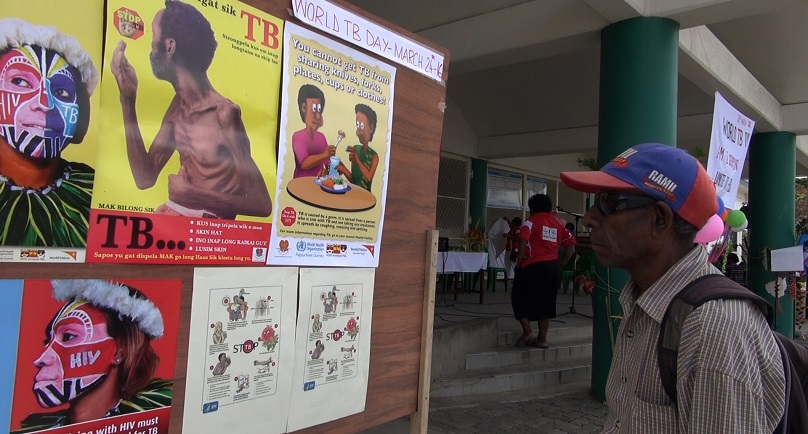 Marking World TB Day last Thursday, a clinic in the Morobe Province reported that tuberculosis cases have increased drastically in 2015 compared to the last three years.

The TB section of Lae’s Buimo Clinic, located at the Housing Commission suburb, opens three days a week and sees an average total of 20 new cases that add on to the overall number of patients already taking a six to nine month medication.

One or two nursing officers handle over eighty patients per day.

There were 648 infected patients recorded last year. In the last four years, the average number of victims was 450.

Statistics have increased for various reasons. Two that stood out for health staff at the clinic were, when patients don’t complete their medication, lack of awareness in the past three years and the HIV epidemic – Tuberculosis is a co-infection.

The revelation at the Lae Ward Council Clinic shows that more work needs to be done in communities to combat the problem.

More needs to be done by the National Government, despite the Prime Minister being part of a TB cure campaign last year.

The National Government needs to adequately fund clinics, whether government- or church-operated around the country that treat TB patients.

It was reported last year that K40 million (US$13 million) to implement the national program on by a special taskforce on TB emergency had not been given, despite the Government’s approval of it.

That funding would have greatly helped Ward Clinics like Buimo.

Buimo Clinic Manager, Miriam Key, had been keeping data that pinpoints the progress of treating TB, her statistics are accurate enough to suggest that the problem is coming back.

“We are working with ward councillors to help with the treatment of TB in the surrounding communities,” said Nurse Key.

The Buimo Clinic not only treats patients along the Boundary Road, but also Nawaeb and other squalid settlements along the Bumbu River, where a dense population of people live without proper drinking water and poor hygiene.

Many other government-run clinics treat TB, but struggle with manpower and equipment. Buimo Clinic is only one in a long list, although it has been the clinic most often referred to for statistics, since Nursing Manager, Miriam Key, started.