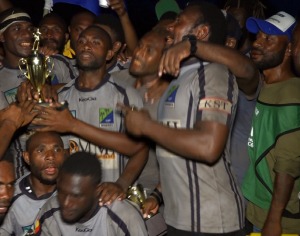 The Kimbe Rebels were crowned champions of the inaugural 2015 Duban Kalibobo Lighthouse Invitational Sevens, over the weekend.

The win has been a long time coming for the Kimbe Rebels, particularly after the team’s lack of form and momentum over the past two years.

Following their two tries to one victory over the Autonomous Region of Bougainville’s Black Orchids, the Rebels believe this is a stepping stone towards bigger things to come.

They were dominant all throughout the competition, with former Pukpuk Henry Liliket and the Ponda brothers in incredible form.

Their entrance into the Cup finals came after a 14-5 defeat over POM Defence in the quarter finals, and an entertaining match against Aroma Coast in the semi final.

Aroma Coast, who had kicked the CRU Boroma’s out of the tournament early in the quarter finals, were close to making a finals appearance, but a final try scored into extra minutes of the second half, saw the Rebels progress to face AROB’s rep side.

Although one of the strongest teams in the tournament, the AROB Black Orchids could not match the Rebels.

The Rebels led at half time 10-0, and began their second half with another try, ruling out the Orchid’s hopes of winning the inaugural cup.

Kimbe walked away as happy chaps, and their coach proud of where this win will take Kimbe rugby in the coming months.