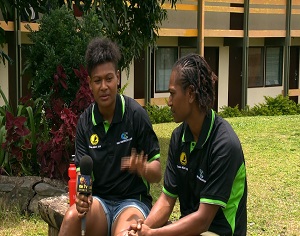 The Kaore boxing duo could be PNG’s best chance at winning gold, for team PNG’s female boxers, at the Pacific Games.

Debbie Kaore, younger sister to former track and field sensation, and PNG Games gold medallist Raphaella, fought her way in to the national team, while Raphaella struggled in the first two days of the National Boxing Trials in Goroka.

Regardless of their results, the sisters are hopeful, in making the team.

Raphaella says, the week that has been, was challenging, but she will remain focused by securing a spot in the team.

She says younger sister Debbie had a better week, taking out fellow NCD Boxer, Sylvia Kenggermer, in the 75kg division.

For Debbie, who has looked up to her older sibling and followed in her footsteps to switch codes to rugby 7s; to fight at the Games in July, alongside Raphaella, would be an incredible experience.

Earlier in the month, President of PNG Boxing Federation, John Avira, released a list of boxers, which indicates the strongest candidates for the PNG Boxing team.

All boxers on the team list will have their performances reviewed in the next week, as those on the selection panel, Mr. Avira, and National Coach, Joe Auofa will have the team finalised by early February.

Alcohol smuggled into Mendi despite ban