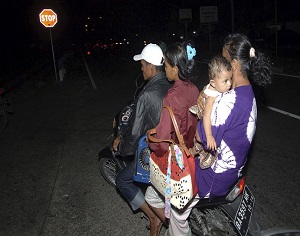 Image: Residents ride a motorcycle to higher ground after an earthquake struck off the west coast of Sumatra in the city of Padang, West Sumatra, Indonesia March 2, 2016. REUTERS/Iggoy el Fitra/Antara Foto

By Kanupriya Kapoor and Gayatri Suroyo

PADANG/JAKARTA, Indonesia (Reuters) – All 22 of the early-warning buoys Indonesia deployed after the 2004 tsunami disaster were inoperable when a massive undersea earthquake struck off the coast on Wednesday, a National Disaster Mitigation Agency official said.

The 7.8 magnitude quake did not trigger a tsunami, and there were no deaths and no major damage, but it did expose gaps in the systems put in place to prevent a disaster similar to the Indian Ocean quake that killed more than 200,000 people 11 years ago.

In addition to the malfunctioning of buoys designed to warn of massive waves, authorities said there were not enough evacuation routes or shelters in Padang, a Sumatra island port city of around one million people that felt the quake.

“There was definitely panic last night, that cannot be denied,” said Zulfiatno, the head of the disaster management agency in Padang who uses only one name, adding that shelters had the capacity to only hold around 200,000 people.

“But the situation has improved from previous years. People have started to understand how to evacuate safely.”

The 9.15 magnitude quake of December 2004 opened a fault line deep beneath the ocean, triggering a wave as high as 17.4 meters (57 feet) that crashed ashore in more than a dozen countries to wipe some communities off the map in seconds.

Indonesia straddles the so-called “Pacific Ring of Fire”, a highly seismically active zone, where different plates on the earth’s crust meet and create a large number of earthquakes and volcanoes.
T

he province of Aceh on the northwest tip of Sumatra bore the brunt of the 2004 tsunami, with at least 168,000 killed.

“WE CAN EASILY FORGET”

Soon after that disaster, Indonesia introduced a sophisticated early warning system using buoys, sea-level gauges and seismometers that can send alerts to countries’ tsunami warning centers within 10 minutes of a quake.

Officials said the procedure is to issue a tsunami warning if a quake of more than 6.5 magnitude and with its epicenter less than 20 km (12 miles) deep happens at sea, and that went smoothly on Wednesday.

But the buoys, which measure the force and speed of water movement, were a missing link in the chain. Authorities delayed the lifting of their tsunami warning because of the inoperable buoys, which cost around $2.3 million a year to maintain.

“We can easily forget. After the quake in Aceh we wanted to do everything, but by 2015 we don’t have money allocated (to fix the buoys),” Sutopo Purwo Nugroho, spokesman for the National Disaster Mitigation Agency, told reporters.

“Most of (the buoys) were broken by vandalism,” he said.
Although there were some strong aftershocks on Thursday, normal life largely resumed at daybreak in Padang.

There were 11 aftershocks during the night following the main quake, but authorities called for calm as they had diminished in strength.

“We do not believe that there will be an earthquake of greater strength,” the National Meteorological Agency said on its Twitter account. “And so residents are urged to keep calm and not be taken in by rumors.”

Fears ran high on Wednesday evening when it was reported that the tremor had measured 8.2 and authorities issued evacuation alerts on loudspeakers, radio and TV. Patients at hospitals in Padang were evacuated and there were traffic jams as panicking residents tried to leave.

However, the U.S. Geological Survey (USGS) revised the magnitude down to 7.8 and within two hours of the quake striking the tsunami warnings were canceled. USGS said the epicenter was 808 km (502 miles) southwest of Padang.

“If we had tried to evacuate outside the city it would have been difficult. Everybody grabbed their bikes and tried to (flee) but it was too much,” said Febridal, a street food vendor in Padang who briefly went to an evacuation shelter after seeing the tsunami warning on TV.

Others ignored all warnings and remained by the shoreline, watching the waves for signs of a tsunami.
“We never heard any alarm, but we saw on TV that there was potential for a tsunami,” said Mulyaman, whose family runs a small seaside restaurant. “We didn’t see any signs of big waves so we decided to stay.”

(This story has been refiled to edit first paragraph)

Exploring Egypt’s Great Pyramid from the inside, virtually