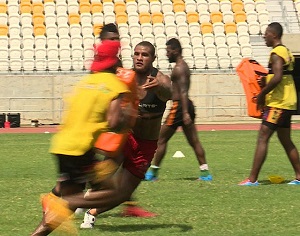 The new look SP PNG Hunters, are on track to open the new National Football Stadium.

This will be the only trial match for the Hunters before they kick off 2016 Intrust Super Cup season.

Coach Michael Marum will use 23 players for this trial match.

This weekend’s trial match will see Marum work out his starting 17 for the Intrust Super Cup opening round clash against the South’s Logan Magpies, on March 6.

Several players will miss this weekend’s clash due to injury; Brandy Peter, Anderson Benford and Enoch Maki are the most serious casualties.

Timothy Lomai was not included in the 23 men squad as he is still under suspension.

Tickets for the match have gone on sale today at all Stop and Shop outlets in Port Moresby.

Ticket prices for the match will be K50 in the grandstand and K25 in the outer stands.