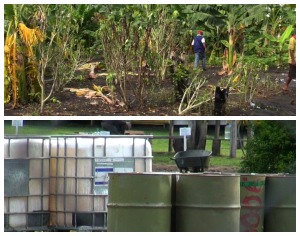 A substantial amount of Jet A1 fuel has accidently been spilled off at the Inter Oil storage camp at Harisu, Gulf province, affecting local people.

There have been unconfirmed reports that say about 15, 000 Litres of Jet A1 fuel has spilled out of the storage tank, contaminating an estimated 248 meters by 168 meters of land area.

It is estimated the fuel sank beneath the ground 50 centimeters.

However, Inter Oil in a Media statement say the matter was reported to the Petroleum and Energy Department and mop-up activities commenced.

Holes were dug in the ground to trap the fuel but this is still not effective.

When trying to get comments from Inter Oil management, the Public Relations officer, Damaris Minikula said the incident is “minor” and unfortunate.

But villagers are not satisfied with the response, claiming that the spillage were over a thousand Litres and should be described as “disaster.”

The incident happened last Thursday but local people claimed Inter Oil has done little to contain the spread of fuel and evacuate a family living at the perimeter of the Harisu site.

A women representative, Sevi Mautaia, said if rain continues to fall they fear the fuel will spread into the swamp, affecting fish and proteins they collect there. Village elders said people are prevented from attending the swamp at this time.

Clan Chief, Fred Levo, who lives with his wife and four children, including a year old baby, said since the incident a week ago, Inter Oil’s response has been very poor.

No awareness was carried out living his family and the community in suspense, not knowing the consequences that will come with.

They also raised concerns about the inability of the Community Affairs and Safety officers on site, who did little to response adequately when the incident happened.

How the incident happened still remains unclear. But the clan chief said it happened at 6pm on Thursday last week. By 11pm the fumes were badly polluting the air and his family was struggling to breath for over six hours.

Fred said his wife vomits and when taken to the health clinic, the medial officer said the effects will remain for a long period of time.

Harisu storage site is owned by Inter Oil and managed by Oilmin, a major support contractor to the company.

The spillage runs into a garden, contaminating the roots of food crops and they are visibly dying out.

Such environmental disasters are very critical to Papua New Guineans. Similar incident in 2012 happened at Basamuk refinery in Madang province where Sulfuric acid spilled into the sea. Many criticized the actions of mining and petroleum companies on social media.