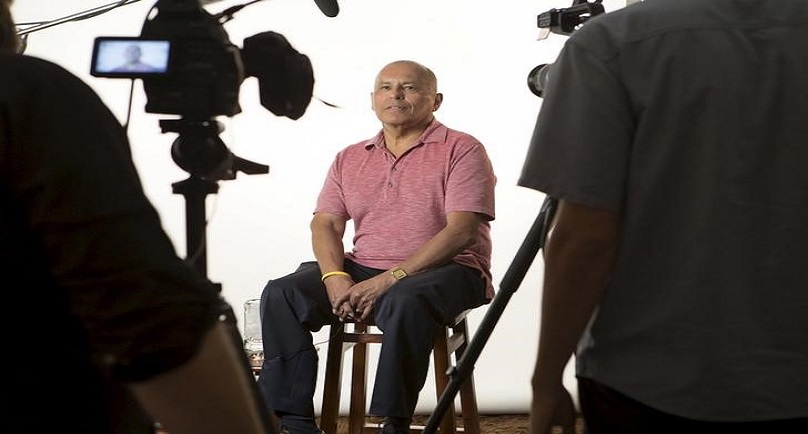 Image: Alec Hernandez who was shot while delivering newspapers, by a gunman on top of a clock tower at the University of Texas in 1966, prepares for an interview for the documentary “Tower” which won the Grand Jury prize for documentary features at the South by South West Film (SXSW) festival in Austin in March 2016, in this undated photo released on March 16, 2016 courtesy of director Keith Maitland and Go-Valley productions. REUTERS/Sarah Wilson via Keith Maitland/Handout via Reuters

AUSTIN, Texas (Reuters) – To tell the story of the first mass school shooting of the television era, filmmaker Keith Maitland interspersed his new documentary with animation so students of today could emotionally enter into a slaughter 50 years ago in Austin.

The movie called “Tower” premiered this week at the South by Southwest, or SXSW, film festival in Austin, blocks from where Charles Whitman climbed a clock tower at the University of Texas in 1966 and unleashed 90 minutes of terror by shooting more than 40 people with a sniper rifle from one of the highest spots in the Texas capital.

“We chose to do animation because this film needs to speak, the story needs to be explored, by young audiences. It is high school and college kids who live under the threat of this kind of violence every day,” Maitland told the audience after a screening on Monday.

The film was the Grand Jury winner for documentary features at SXSW.

The Texas shooting in which Whitman killed 16 people before being fatally shot by police was considered one of the seminal events of the era and shook the country.

For the survivors and family members of victims of the Austin rampage, the carnage from mass shootings that now seem to play out almost weekly in the United States serves as a reminder that no one has found a way to halt the violence.

“I feel that no lessons have been learned,” said John “Artly” Fox, then a 17-year-old student who crossed one of the killing fields to help pull a pregnant woman shot by Whitman to safety.

“It seems to me that Whitman, as disturbed as he was, gave a template of action to other disturbed minds,” Fox told Reuters this week, nearly 50 years after the event.

“Tower” uses animation, black-and-white footage from the event and full-color interviews to relive tales of the survivors and bereaved families. Maitland steered the movie away from Whitman, a 25-year-old former Marine who brought a cache of weapons to the tower’s observation deck about 250 feet (76 metres) in the air.

‘IT NEVER STOPS’
In animation where they appear as their characters’ younger selves, the voices of actors speak in words used by the protagonists, such as former Austin police officer Houston McCoy, one of the three officers and one civilian who climbed the tower to confront Whitman.

“I realized something is happening that I ain’t ever seen before,” a voice actor portraying McCoy said in an animation.

Along with McCoy who was armed with a shotgun, Ramiro Martinez, another of the officers, turned a corner on top of the tower armed only with his service revolver to take on Whitman.

Martinez, in real life, speaks about changes since then in helping police and students better react to active shooters. He also reflects on the unrelenting spate of carnage.

“The cycle just keeps on going. It never stops,” he said in remarks filmed at a law enforcement training class.

A new monument to the victims is due to be unveiled at the university on the shooting’s 50th anniversary on Aug. 1.

That is also the day a new law backed by the state’s Republican leaders goes into effect that will allow students with concealed handgun permits to bring firearms into classrooms.