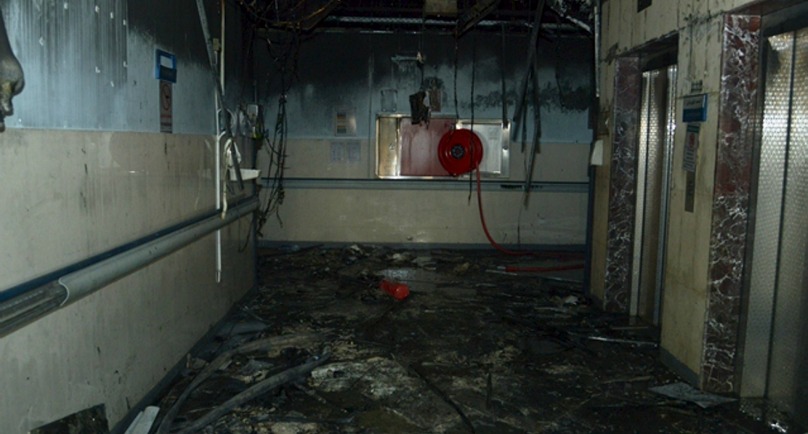 DUBAI (Reuters) – A fire tore through the intensive care unit and the maternity ward of a Saudi hospital before dawn on Thursday, killing at least 24 people and injuring 123, officials said.

The fire broke out at the general hospital in the southwestern port city of Jazan, the capital of the Jizan region, one of Saudi Arabia’s poorest areas.

The civil defence agency said 25 people died but a later statement by Health Minister Khalid al-Falih put the death toll at 24. Two of the dead were security guards and one was a child, officials said.

Government-controlled al-Ekhbariya television interviewed a witness who said the cause of the fire seemed to be electrical, and that it took only three minutes to sweep through the hospital.

“We could hear the women screaming,” said the man, who was not named.

Photographs published on Twitter by the civil defence agency showed heavy smoke and an intense blaze which appeared to have severely damaged the interior of the white-walled hospital. Some rescuers used a ladder to gain access through a window.

Criticism of Saudi Arabia’s ruling family is frowned upon, but a string of comments by Twitter users suggested the fire was the result of official negligence and criticised a series of accidents at public facilities in the kingdom this year.

“Does the health minister have the courage to submit his resignation after the fire at Jazan General Hospital? What disaster lies after this calamity?” tweeted one person, whose account identified him as Mohammed Alsubaie, from Riyadh.

A correspondent for Saudi-owned al-Arabiya television reported he had seen several emergency doors locked with chains when he visited the hospital after the disaster. He said the hospital had previously received official warnings over safety violations.

The region’s Director of Health Affairs, Ahmed al-Sahli, denied any safety problems, telling al-Arabiya that many people had been able to escape easily from the blaze because the doors were open and safety equipment was in place.

But Eissa Amaish, whose sister was killed in the fire, blamed the hospital’s management. “What happened in this hospital was a crime of murder,” he told al-Arabiya. “This hospital was not equipped at all to deal with a fire.”

In a brief statement, Falih said he recognised the ministry had failed, but that it was too early to identify the causes of the disaster and a committee would investigate them.

“When we have deaths like this number, there is no doubt that there is a failure in the system of the ministry of health, and we would like to ensure that this will not occur again at any other hospital,” he said.

A deadly crush at the haj in Mecca in September killed 769 people, according to Saudi officials. Reuters calculations based on numbers provided by the pilgrims’ home countries showed the death toll was at least 2,070.

Two weeks earlier, 110 people died in Mecca’s Grand Mosque when a crane working on an expansion project collapsed during a storm, crushing pilgrims below. In August, fire swept through an oil workers’ residential compound in the town of Khobar, killing 10 people.

Jazan, near the Yemeni border, is the focus of a $20 billion plan to develop the local economy by building an industrial complex that produces and uses oil products for manufacturing.

The city has also been caught up in Saudi Arabia’s military intervention against Houthi rebels in Yemen this year. On Tuesday, Saudi authorities said they had shot down a ballistic missile fired from Yemen that was on a trajectory towards Jazan.

After New York, London kicks off fashion week with eyes on creativity