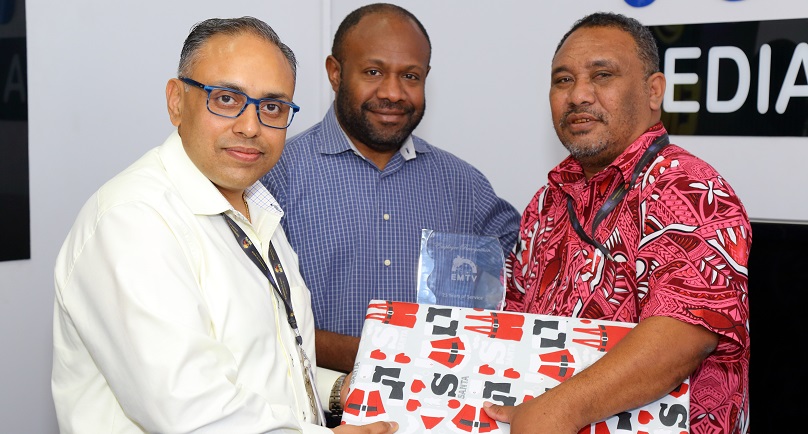 While Media Niugini celebrates its 27 years of broadcasting as EM TV, Tau Gima has also been honoured for his 25 years of dedicated service to Media Niugini Limited.

Tau, proudly from the Gaire Village of the Central Province, sat down for a candid interview to speak of his 25 years of long service and dedication to EM TV. He describes the changes the media company has gone through to become what it is now, with all his struggles and successs.

“Previously, we were holding onto big one inch reels, putting on the big machines.  Now people are lazy… We would never sit or even stand around, we were always moving around,” Mr Gima speaks of his first job in the Presentation department back in 1989.

Despite their length, every advertisement, every program had their individual tapes, and so Tau and his fellow workers would always be physically there to eject and slide in their respective tapes as per their set presentation run down.

“Due to my shifts, I would stay late and sometimes not go home at all, instead I’d sleep on the streets,” he recalled.

The year 1994 was significant to Mr Gima’s working life in EM TV, when he flew down to Brisbane, Australia to pick up the new traffic system for EM TV.

“From 1994, I went with two girls in Traffic, while I was in presentation. Our then CEO sent us down to bring the new system back.”

After a week there, he had obtained knowledge more than anybody else. After the new system was installed when they came back, he was promoted to Supervisor for Traffic.

Recently, the EM TV traffic system has been upgraded to the new Broadcast Management System. Tau has also been promoted, yet again, to management level.

Whilst he had better opportunities elsewhere, his support from his wife and his six children kept Mr Gima fixed in EM TV.

Another reason that has kept him in EM TV, is his staff that work under him, those he trusts and relies on. Mr Gima values work ethics and it is this that his loyal and hardworking staff in EM TV has given him.

It is through the dedication and service of men like Tau Gima, that now the vast majority of Papua New Guinea’s population who have access to the latest news, Sport, information and entertainment from around Papua New Guinea and overseas.

The 47 year old’s plans after EM TV are either run a small business to sustain his family, or keep busy and fit with sustainable activities such as gardening and fishing.

His immense contribution to this media company in the last 25 years has earned him respect from his fellow workers and he is looked up to by many.