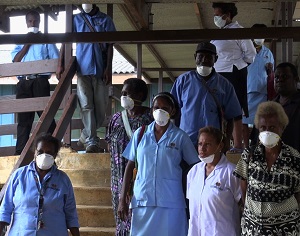 This is the worst scenario that has forced Daru General Hospital Staff to stage a ‘Sit In Protest’ on Monday February 2, 2014.

According to Infection control TB committee Chairperson, Galeva Sere, the hospital has exhausted resources, waiting only for miracles to happen.

Staff are likely to summon the Fly River Provincial Government and their parliamentarians, for negligence and failure to address the escalating tuberculosis drug-resistant issue.

The series of grievances and demands were contained in a petition, presented last month to the hospital’s board, National Health Department, Fly River Provincial Government and stakeholders.

Demands and recommendations were directed to the hospital board to take full ownership of staff’s:

including the management structure and a guideline for courses of actions to be taken.

Mrs Sere, said, there was an immediate need to address the TB situation and hospital staff have made it their business to combat the epidemic.

More TB patients are admitted to the wards, with a result of overcrowding. Patients are also using the guardian rooms.

Daru General Hospital Acting Chief Executive Officer, Dr Naomi Pomat, while acknowledging efforts by the Australian Government and other aid donor partners in the fight against TB, staff called on provincial leaders to do more, and protect people’s lives.

The multi-drug resistant TB problem in Daru, Western Province, must be given priority by all levels of government and communities.