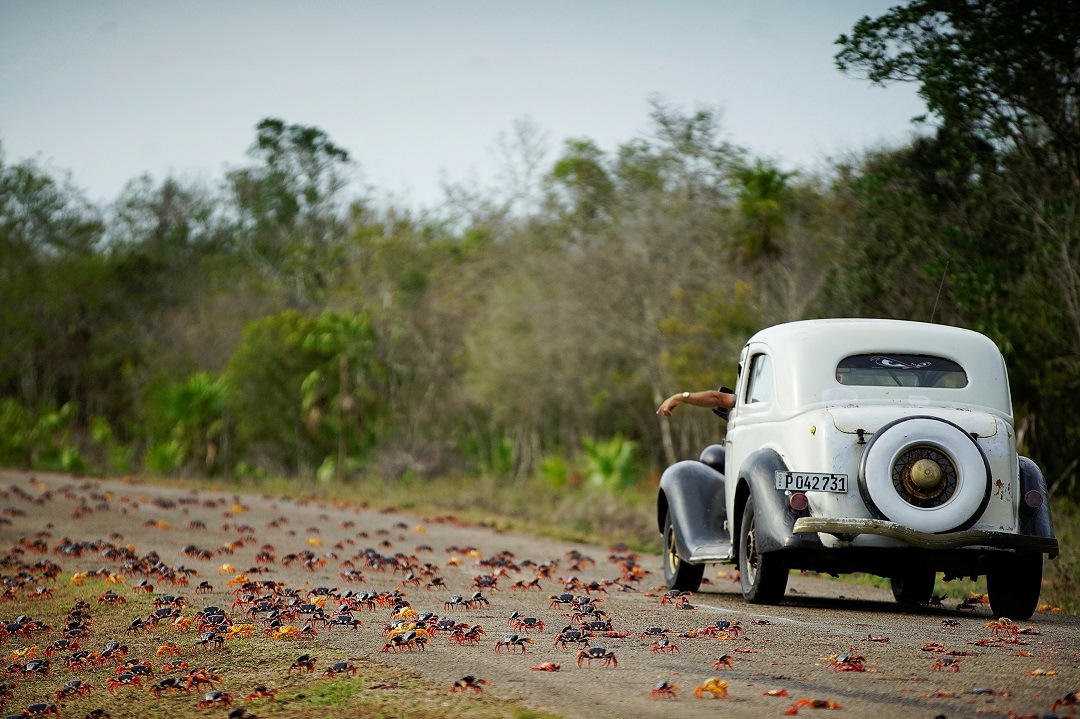 Image: A man driving a vintage car reacts as he passes by crabs crossing a highway on their way to spawn in the sea in Playa Giron, Cuba, April 21, 2017. REUTERS/Alexandre Meneghini

BAY OF PIGS, Cuba (Reuters) – Cuba’s Bay of Pigs has been invaded again, this time not by U.S.-backed anti-Castro forces, but by millions of red, yellow and black landcrabs.

Each year, after the first spring rains, the crabs march for days from the surrounding forests to the bay on Cuba’s southern coast to spawn in the sea, wreaking havoc along the way.

At dawn and dusk they emerge, scuttling sideways toward the sea, climbing up house walls and carpeting the coastal road that curves around the bay. The stench of crushed crab fills the air and their sharp shells puncture car tires.

“Thirty to 40 can enter without you even realizing it,” said Edian Villazon, who runs a food hut opposite the sea, which does not serve up crab meat. Cubans believe this type is toxic. “We have to always keep the door shut.”

The Bay of Pigs, where in 1961 Cuban exiles landed in a failed attempt to end Fidel Castro’s revolution, lies within a national park where 80 percent of Cuba’s endemic birds, along with crocodiles and other wildlife, can be observed.

With its deep sinkholes, coral reefs and turquoise waters, the bay is known as one of Cuba’s best spots for diving. Visitors have spiked in recent years, in tandem with the overall tourism boom since the U.S.-Cuban detente.

“It’s very surprising and impressive to see so many crabs in one go and to watch them crossing so quickly,” said 36-year-old French tourist Emilie Lannegrand, adding it was “a little heartbreaking” to see so many crushed on the road.

As cars speed by, some swerving to avoid the 10-legged crustaceans, the cracks of carapaces zing through the air.

That does not threaten the survival of the two prolific species, Gecarcinus ruricola and lateralis, which are not endemic to Cuba, said Jorge Luis Jimenez, a science ministry official who works in the park.

Similar crab migrations occur in other parts of Cuba at the same time of the year, as well as in some other special ecosystems such as Australia’s Christmas Island.

At the Bay of Pigs, the adult crabs return to their forest burrows after releasing clouds of eggs and are joined a couple of months later by the baby crabs which hatched at sea, said Jimenez.

For locals, the crab invasion is good business.

Ito Molina, 45, said tourists would happily pay $10 for tire repair, a princely sum compared with the average state salary of around $25 per month.

For patches, he applies condoms, which get put to many uses in Cuba given how cheap and readily available they are.

“All the cars pass along this road, and they all get punctures,” he said. “So we stand there and repair the tires.”

Taking the stairs may boost energy more than drinking a soda

All hospitals in eastern Aleppo out of action after bombardments – officials

Venezuela to push ahead with assembly in July despite unrest