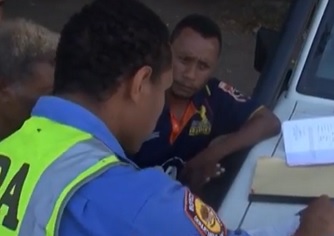 Vehicles travelling in and out of Port Moresby are being regularly checked through roadblocks conducted along sections of the Porebada road and the Magi and Hiritano Highways.

Vehicles travelling into Port Moresby from Central and Gulf Provinces have been checked at these roadblocks.

The Central Province Transport Authority in a joint operation with the National Road Safety Council and police traffic unit have set up three roadblocks; and are checking for vehicles that are not roadworthy and for those transporting alcohol or betel nut in and out of Port Moresby.

Central Province Transport Authority Inspector, Robin Hitolo said fines are being imposed on vehicles that are considered to be in conditions that aren’t roadworthy. Alcohol and betel nuts have also been confiscated by police.

Fines have also been imposed on drivers of vehicles that are overloaded with passengers, have smooth tyres, and are without registration or crew permits.

Unregistered vehicles are being impounded at the CPTA Headquarters in Port Moresby and PMVs running unauthorized routes are charged.

Meanwhile, about 10 bags of betel nuts transported in a vehicle were confiscated by police at Laloki roadblock this morning.  Speaking off camera, policemen said betel nut smugglers carrying betel nut will be charged and the vehicle will be impounded at the nearest police station.

This road safety operation will continue until January 3rd 2015.