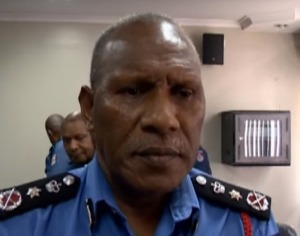 Police Commissioner, Gari Baki, is appealing to the expatriate driver who filmed the traffic police officer, asking for bribe at a police road block in Port Moresby, to come forward.

Baki’s comments follow the backlash from the public, on the video that went viral on social media.

He is now asking the expatriate driver to lay an official complaint at any police station in the NCD Command in order for police to proceed with the investigation.

Commissioner Baki said he has not watched the video himself but is aware of the incident.

“I have not watched the video myself, but I am aware of the incident. We will treat it like the Condom Eating Saga,” Baki said.

He said though the incident occurred last year, he has declared 2016 as a Year of Discipline and says the case will be treated like any other serious offence committed by police officers.

‘I am applying to the expatriate driver who was asked to pay some money to come forward. If he does not want to contact police, he can speak to the Port Moresby Chamber of Commerce president, David Conn,” Baki added.

A suspect officer was apprehended by Port Moresby police last Friday, in relation to the incident.

Moroi’s response to dismissal of Petition