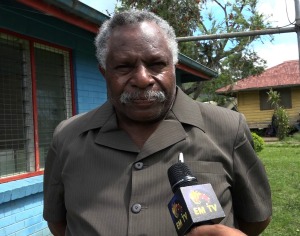 Police Minister, Robert Atiyafa, says police manpower will be increased in the next two years.

Remote places like Menyamya in Morobe, Telefomin in the Sandaun Province and parts of Obura-Waninara district like Marawaka in the Eastern Highlands have one police officer.

The lack of police continues to be a problem for many remote parts of the country.

Morobe’s Menyamya district is a classic example, and questions were put forward to the Police Minister, Robert Atiyafa on the 30th of December 2015.

Atiyafa replied, saying the police are recruiting 2000 personnel per year to ease the problem.

“We are increasing police numbers; this year two thousand graduated from Bomana, it’s an on-going amount for every year,” said Minister Atiyafa.

In Menyamya, there is only one police officer working with very limited resources. No vehicle nor housing. It’s an aging rural command and the police officer has to travel far to village communities that are clusters of people scattered across rugged terrain.

Last year the body of a man, thought to have been murdered, was kept for three days before a lone cop was flown into Lagai village by a chopper to inspect the body.

Atiyafa has also asked the Australian Federal Police for an expansion of their partnership with the Royal Papua New Guinea Constabulary to other provinces outside of Lae and Port Moresby.