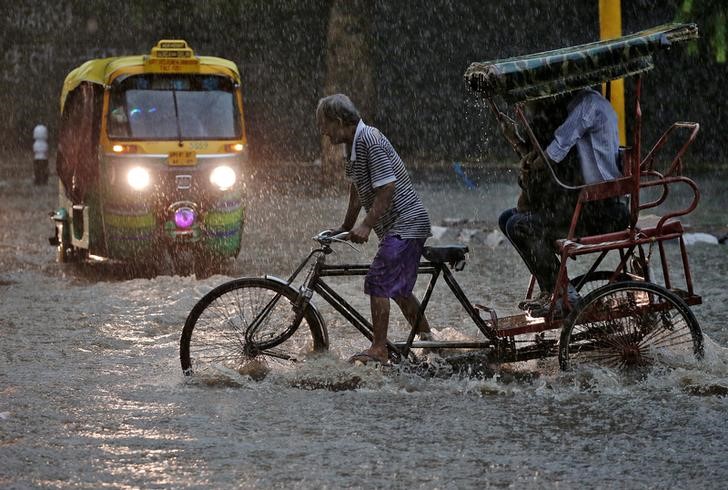 Scientists have known for years that climate change is disrupting monsoon season. Past research based on computer models has suggested that the global heating caused by greenhouse gases, and the increased moisture in the warmed atmosphere, will result in rainier summer monsoon seasons and unpredictable, extreme rainfall events.

The new paper, published Friday in the journal Science Advances, adds evidence for the theory by looking back over the past million years to give a sense of monsoons to come.

The monsoon season, which generally runs from June to September, brings enormous amounts of rain to South Asia that are crucial to the region’s agrarian economy. Those rains directly affect the lives of one-fifth of the world’s population, nourishing or destroying crops, causing devastating flooding, taking lives and spreading pollution. The changes wrought by climate change could reshape the region, and history, the new research suggests, is a guide to those changes.

The researchers had no time machine, so they used the next best thing: mud. They drilled core samples in the Bay of Bengal, in the northern Indian Ocean, where the runoff from monsoon seasons drains away from the subcontinent.

The core samples were 200 meters long and provided a rich record of monsoon rainfall. Wetter seasons put more fresh water into the bay, reducing the salinity at the surface. The plankton that live at the surface die and sink to the sediment below, layer after layer. Working through the core samples, the scientists analyzed the fossil shells of the plankton, measuring oxygen isotopes to determine the salinity of the water they lived in. The high-rainfall and low-salinity times came after periods of higher concentrations of atmospheric carbon dioxide, lower levels of global ice volume and subsequent increases in regional moisture-bearing winds.

Now that human activity is boosting levels of atmospheric greenhouse gases, the research suggests, we can expect to see the same monsoon patterns emerge.

Steven Clemens, a professor of earth, environmental and planetary sciences at Brown University and lead author of the study, said, “We can verify over the past million years increases in carbon dioxide in the atmosphere have been followed by substantial increases in rainfall in the South Asian monsoon system.” The predictions of the climate models are “wonderfully consistent with what we see in the past million years,” he said.

Anders Levermann, a professor of climate dynamics at the Potsdam Institute in Germany who was not involved in the new paper but has produced research on climate model monsoon projections, said that he was pleased to see research that supported the findings of forward-looking climate models. “It’s a tremendous body of information,” he said, “and it’s really nice to see in actual data that reflects more than a million years of our planet’s history, to see the physical laws that we experience every day leave their footprints in this extremely rich paleo-record.”

Levermann added that the consequences for the people of the Indian subcontinent are dire; the monsoon already drops tremendous amounts of rain and “can always be destructive,” he said, but the risk of “catastrophically strong” seasons is growing, and the increasingly erratic nature of the seasons holds its own risks. “And it is hitting the largest democracy on the planet — in many ways, the most challenged democracy on the planet,” he said.

Clemens and other researchers took their samples during a two-month research voyage on a converted oil-drilling ship, the JOIDES Resolution. It carried a crew of 100 and 30 scientists on a trip that began in November 2014. “We were out over Christmas,” he recalled, and while “it’s difficult to be away from family that long,” the payoff has finally arrived. “We’ve been at this years,” he said, “creating these data sets. It’s satisfying to have this finally come out.”