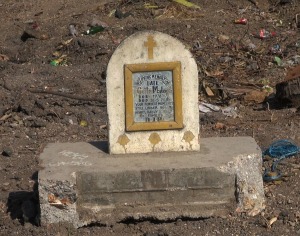 Cemeteries along the Koura Way at Gabi village in Port Moresby have been cleared to make way for a multi-million Kina road project.

The Tokarara-Hanuabada bypass will soon run through the former resting place of the locals.

The land was once the resting place of those who passed away many years ago.

79 graves have been dug and reburied at respective places. Some were buried at the public cemetery at nine mile.

The oldest grave is 29 years, belonging to the Chief of Hagwa and Gabi village, lthe ate Hila Iara.

Just one week ago, he was reburied at a new location.

NCDC cleared the roadside to create the 4.7 km, four lane road between Tokarara and Hanuabada.

The project, worth more than K80 million, is in its middle phase of construction.

According to locals, they willingly gave up their burial land for fear of being removed by force.

Locals said it was an emotional, yet strange exercise to remove the dead remains of their loved ones.