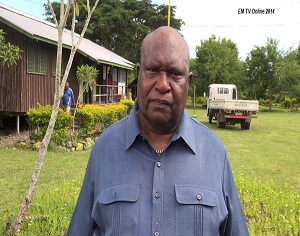 Papua New Guinea’s housing minister, Paul Isikiel says the government is working towards addressing the housing problems in urban areas in the country.

The minister’s response follows resentment about high rental fees in Port Moresby and Lae, and the run-down state of properties owned by the National Housing Corporation (NHC).

The demand for affordable accommodation in Lae City continues to increase, along with rental costs.

The economic boom has taken about half of the undeveloped land in Lae, and residential developments are being pushed further out to the fringes of the city.

Paul Isikiel and the NHC are also facing similar problems, where they are still looking for available land in Lae City so that new houses can be erected.

Properties owned by the NHC have deteriorated over the years; the Salamanda flats in Lae City is an example of run-down accommodation owned by the corporation.

Minister Isikiel says the government is now investing millions of kina into seeing affordable housing programs being rolled out in the country.

In Port Moresby, the NHC has acquired 60 hectares of land at the Durand Farm Project which will see the construction of 2,400 houses on state land.

Minister Isikiel says that they are still in talks with landowners to acquire land from the Igam Barracks up to Bumayong and the Nadzab area, for new houses to be constructed in Lae.