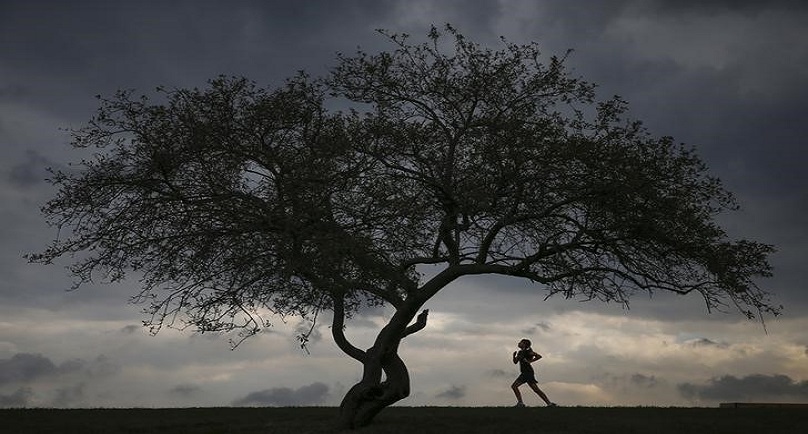 Image:A woman is seen jogging at Cunningham Park in the borough of Queens in New York, September 16, 2014. REUTERS/Shannon Stapleton

(Reuters Health) – Women who suffer from a leading cause of infertility may increase their odds of conception if they exercise and lose weight, a U.S. study suggests.

Among three groups of women, those who exercised lost the most weight and had more live births than those who didn’t.

Women with PCOS often experience irregular menstrual cycles, weight gain, excess hair on the face and body and infertility. They may take birth control pills to boost female hormones and regulate ovulation for several months before trying to get pregnant. This is thought to improve their odds of success once they stop taking contraceptives and start trying to conceive.

For the first four months of the study, one third of the women took birth control pills for that purpose, while a second group was directed to exercise and follow a low-calorie diet. A third group got both of these interventions.

After that initial phase, women taking contraceptives stopped. At this point all of the women went through four cycles of medically induced ovulation, designed to help them get pregnant.

Among 49 women in the initial birth control group, five had babies. That compared with 13 babies for the 50 women assigned to diet and exercise at the start of the study and 12 infants for women who got a combination of both interventions.

The study was too small to show a statistically meaningful difference in pregnancy outcomes between the two groups who dieted and exercised, the authors acknowledge in the Journal of Clinical Endocrinology and Metabolism.

But the results suggest that exercise and weight loss might play a bigger role in conception than just regulating ovulation with birth control pills before trying to conceive, said lead study author Dr. Richard Legro of Pennsylvania State College of Medicine in Hershey.

“Based on our study, women with PCOS who are obese would derive the greatest improvement in their quality of life and reproductive parameters (body hair, androgen levels, polycystic ovaries and control of menstrual bleeding) with maintenance of their metabolic health through the combination of oral contraceptives with lifestyle modification and weight loss,” Legro said by email.

All of the women in the study were overweight or obese, which is linked to fertility problems regardless of whether women have PCOS.

Women who exercised during the study lost significantly more weight than the group assigned only to birth control pills.

At the same time, the women only taking contraceptives were more likely to develop a condition known as metabolic syndrome, a cluster of conditions including high blood sugar that have been linked to fertility challenges as well as heightened risk for problems such heart disease and diabetes.

As many as one in 10 women of childbearing age may have PCOS, according to the U.S. Department of Health and Human Services. The cause is unknown, but the condition is thought to be influenced by many factors, including genetics, with PCOS more likely in women who have an afflicted mother or sister.

While the findings confirm some earlier research linking metabolic changes achieved though lifestyle improvements to better reproductive function, weight loss can still be a tricky prescription, noted Dr. Gordon Wright Bates Jr., a specialist in reproductive endocrinology and infertility at the University of Alabama at Birmingham.

Women with PCOS who come to a weight-loss clinic at his university can struggle to achieve significant changes even when they are making the effort to conceive, Bates, who wasn’t involved in the study, said by email.

“Although the study adds considerable evidence to support lifestyle modifications and weight loss to optimize reproductive potential and the response to treatment, both of these remain elusive for many patients,” Bates said.