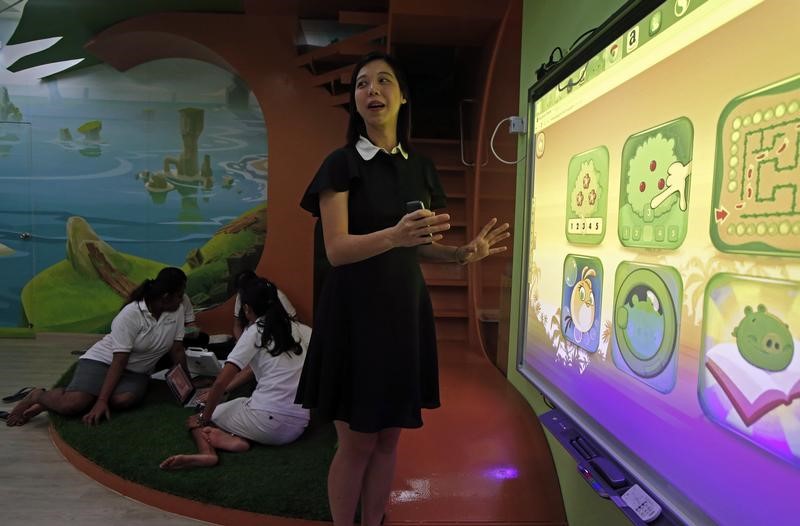 Image: Dreamkids Kindergarten principal Dawn Choy shows how the Smart Board is used for educational games in class as teachers plan their lessons in an Angry Birds-inspired classroom environment in Singapore February 11, 2015. REUTERS/Edgar Su

PARIS (Reuters) – Fifteen-year-olds from Singapore topped the ranks of the best- performing students in the OECD’s triennial survey on international education, followed by Japan, Estonia, Finland and Canada.

The metropolitan areas of Hong Kong, Macau and Taipei also scored high in the survey covering science, reading and mathematics, the Paris-based Organisation for Economic Cooperation and Development said.

Some 540,000 students across 72 countries or cities were quizzed with a computer-based test during the latest version of the survey, known as the Programme for International Student Assessment (PISA).

With a special focus this time on science, the survey found that students knowledge in the field was broadly stable over the last decade, although Colombia, Israel, Macau, Portugal, Qatar and Romania made significant gains.

Among the 35 mostly wealthy countries belonging to the OECD, one out of five students on average did not achieve the baseline level of proficiency in science.

“Sciences education isn’t keeping up. Why? Because science itself is moving at lightening speed,” said OECD Secretary General Angel Gurria.

Presenting the results, he said that students from Singapore were effectively a year and a half ahead of other students on average.

Students from both Britain and the United States saw a decline in their reading, mathematics and science scores on average since the last survey in 2012.

A nearly 20 percent increase in spending per student over the past decade in OECD countries had little impact on students’ scores in science, the survey found.

Students in private schools scored better in science than public schools, but that was no longer the case after adjusting the data to take students’ social and economic backgrounds into account.

“A privately funded education is not a guarantee of success,” Gurria said.

The OECD found Canada, Denmark, Estonia, Hong Kong and Macao scored high both in terms of performance and the equitable quality of their school systems, while the United States in particular had improved in term of equity.

Israel’s women combat soldiers on frontline of battle for equality