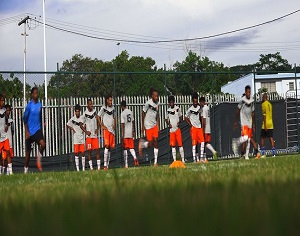 The PNG men’s football team has assembled in Port Moresby today ahead of their two friendlies against the Solomon Islands, which begin on Thursday.

Grand finalists Hekari United dominate the squad along with newly crowned Telikom NSL Champions, Lae City Dwellers, who have contributed six of their own.

Flemming Serritslev, the new PNG national coach, had earlier stated that he would use the friendlies to gauge the team as a unit.

“I am happy with the players here, they are committed to the sport and eager to lean which makes it easier for me to coach them,” he said.

Prior to the win by now back-to-back champions Lae City Dwellers, midfielder Obert Bika and centre back Valentine Nelson had been rewarded with call-ups, as well as defenders Sammy Campbel and Felix Komolong from Hekari.

Philip Steven is one of only two Rapatona players in the squad.

The squad will travel on Tuesday to Honiara, with 15 players backing up from Saturday’s grand final, which was a combination of brutal one on one challenges and individual finesse.

Meanwhile, Hekari Manager, Vonnie Kapi Natto, has expressed her disappointment in the timing of the friendlies, with the majority of her squad all travelling for national duties on the eve of the OFC Champions League. They then return just three days prior to the competition, with concerns that her squad may not have the necessary time to gel again.

Serritslev will use these matches as the first test for a side that has not had many opportunities to play over the past year.

After the short stint by the team in the Solomon Islands, they will then prepare for a match against Korea on May 5.