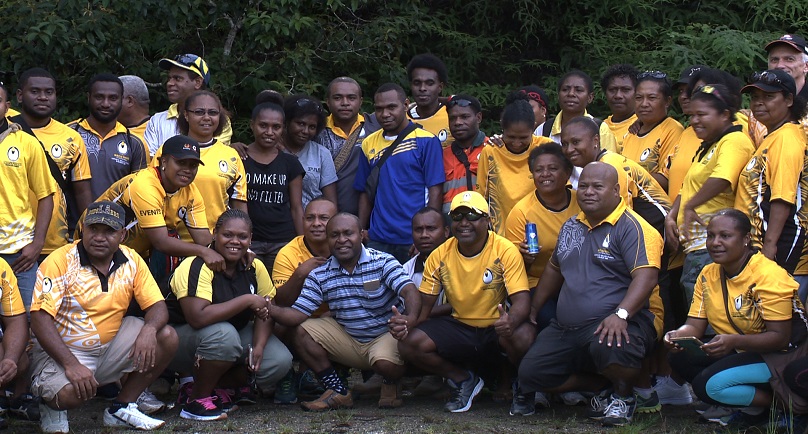 NASFUND employees put a refreshing twist to the conventional indoor staff workshop experience by taking it to the wild.

The superannuation company’s staffs have copped criticism for hiccups in a transition from the old administration system to a new system called PenProPlus.

In a move to rejuvenate their drive in this vital transition, Nasfund staff took a strategic walk through the Variarata National Park’s challenging tracks.

They began a beautiful Saturday, March 11, morning with a brief warm up at the beginning of what was to be an uphill two kilometre track.

With the exception of a handful among the enthusiastic bunch, none of them knew what to expect apart from a Park caretaker’s verbal orientation.

NASFUND’s Chief Members Services Officer, Charlie Gilichibi, encouraged the staff to see it as the planning stages of the member services transaction.

With only promises of a beautiful view at the top in mind, they made tracks into the heart of Variarata’s forest.

About 500 metres into the track, what began as a merry tight knit file of individuals, became scattered, with some tired quickly and fell behind, others became anxious to reach the top, while a minority soldiered the muddy slippery and at times jagged terrain.

It was a huge contrast to their daily and rather sluggish office environment as some admitted 1,500 meters into the climb.

But through 45 minute of trudging through mud and braving the slippery slopes the entire team drew on each other’s energy to reach the end.

After a brief climb up hill they were greeted with a breath taking view; Port Moresby’s bustling city now silently lay at a distance.

But Gilichibi’s analogy did not end here, alas a final climb to drive home the importance of work-life balance; keeping fit and healthy.

Huffing and puffing they made headway up a shorter, grassier, but steeper track to get a better view.

He has been working alongside NASFUND staff to push the transition forward.

Aon Hewitt recently migrated to a new administration system PenProPlus from the old one, Superb 2000 to better manage member’s funds in an evolving world of information technology.

The previous system limited its ability to provide upgraded services and functionality to members.

With a database of over 515,000 members the transfer process has taken longer than anticipated bringing on minor technical issues and an overall delay in otherwise trivial payment transactions.

As a direct result, NASFUND Staff have been criticized for inaccuracy and incompetency.

The walk was a chance for them to recover from the blow of wrongly placed blame and gain a new perspective.

NASFUND’s Chief Executive Officer, Ian Tarutia, has said before that NASFUND was aware of the impact that the delays have had on clients assured that they are working with Aon Hewitt to bring the payments up to date.