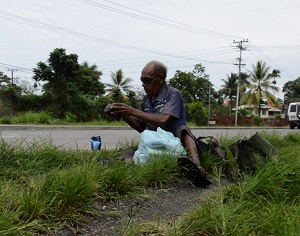 Lae residents are feeling the pinch of high taxes charged by the government on income, including goods and services.

A family living near the top town area has spoken out about their challenges in urban Lae City.

Herman Mua and his family are part of the 30 per cent of the population living in towns and cities.

Herman and his wife have retired and reside with their grandchildren. The cost of paying for food alone per day is over K100.

Papua New Guinea’s extended family culture is slowly dying in urban areas; today a family unit works to survive on its own. This can be seen in Lae, like any other modern city in the world.

For others less fortunate than those with a job and home, every day is a struggle to get food, shelter and water. When EM TV met Tony Orio on Lae’s Huon Road, one of the busiest roads in the industrial hub, Tony was smashing empty cans on the curb that he will sell to a recycling company.

Tony hopes to make K15 to pay for food.

Oro Governor Gary Juffa, in parliament last week, questioned Treasury Minister Patrick Pruaitch on the reduction of income tax charged to Papua New Guinea’s, which is now at a threshold of 35 per cent.

Governor Juffa called for an explanation as to why this rate has not been reduced to 20 per cent. Minister Pruaitch explained that he wasn’t aware of the proposal, but studies are being conducted for a tax review, which will be tabled to the cabinet.

“Part of that exercise is basically waiting for the report of the Tax Review Committee,” said Minister Pruaitch.

On the ground, people like Tony say the cost of food in the shops have made it difficult to survive on an average K15 per week. Tony’s struggles are a snapshot of the socioeconomic problems amidst Lae’s growth and urban developmen’s.