Women in rural Papua New Guinea are keen to engage in agribusiness but many have traditionally struggled to take leadership roles. That is beginning to change, Curtin University researcher Dr Gina Koczberski tells Business Advantage PNG.

Operating small-scale agribusiness financially empowers women by giving them greater control of household income and expenditure, according to Dr Gina Koczberski, who is researching ways women in rural areas of Papua New Guinea can take up more leadership roles in agribusiness.

It also results in a range of benefits for the wider community. On average, 75 per cent of income generated by women is used to meet family needs, compared with 25 per cent of men’s income.

Koczberski also observes that when women take on entrepreneurial roles, families are more resilient and capable of adapting to external shocks, such as drought, illness or death.

‘Women in rural Papua New Guinea are beginning to engage in agricultural activities at a commercial level.’

‘The economic and social impacts on families, and communities, of more women having control over their own income are likely to be significant,’ she adds.

Women in rural Papua New Guinea are beginning to engage in agricultural activities at a commercial level, says Koczberski.

However, there is little knowledge of how women can become successful entrepreneurs, or of the barriers that limit their engagement.

‘(The project) will investigate why women in rural areas of Papua New Guinea aren’t transitioning to more empowered, entrepreneurial positions in agri-business.’

Koczberski is leading a research project to address these issues, which she will conduct with Professor George Curry, also from Curtin University’s Department of Planning and Geography.

The project, which was launched in late 2016, will investigate why women in rural areas of Papua New Guinea aren’t transitioning to more empowered, entrepreneurial positions in agri-business, despite already being an integral part of food production.

It is funded by a A$1.2 million (K2.88 million) grant from the Australian Centre for International Agricultural Research and will run over four years. The aim is to identify tactics that will support women in leadership roles. 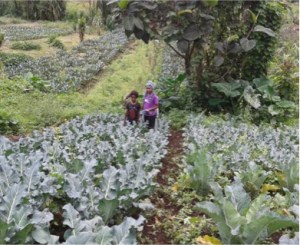 The project is a collaborative effort between Curtin University, the Coffee Industry Corporation, the PNG Oil Palm Research Association, the PNG Cocoa and Coconut Institute, PNG Unitech and CARE international.

In addition to understanding the barriers many women are facing, the project aims to work alongside government to develop effective policies and programs.

‘Despite the government funds dedicated to SME development, there remain large gaps in our knowledge of some of the constraints on SME development in the agricultural sector.’

Koczberski explains that further research is required to understand the sector at both a household and village level, and the actions required to build on opportunities that already exist at the local level.

Data will be collected across five provinces from rural individuals and households, private and public sector organisations from the main commodity crop industries, and the fresh food produce sector, Koczberski says.

At the institutional level, the researchers will evaluate past and present policies, programs and services.

‘This step will pinpoint the gaps, barriers, successes and failures in institutional programs and interventions for women.’

Three small schemes will be piloted to foster women’s transition into managing their own or family-led agricultural enterprises.

One of these schemes will work with CARE International to evaluate a ‘business development package’ with two farmer cooperatives in the Eastern Highlands Province, Koczberski adds.

Traditionally women in rural Papua New Guinea haven’t held leadership roles in business, but according to Koczberski this is beginning to change.

‘There are some pioneering women beginning to engage more strongly in domestic and international markets, forging new pathways that are increasing women’s income and status.’

‘Although they are few in number, their successful enterprises offer model pathways,’ Koczberski says.