An IMF report on Papua New Guinea has suggested that the Government has responded to pressures on the budget and foreign exchange shortages. It has a suggestion for how to avoid similar difficulties in the future. 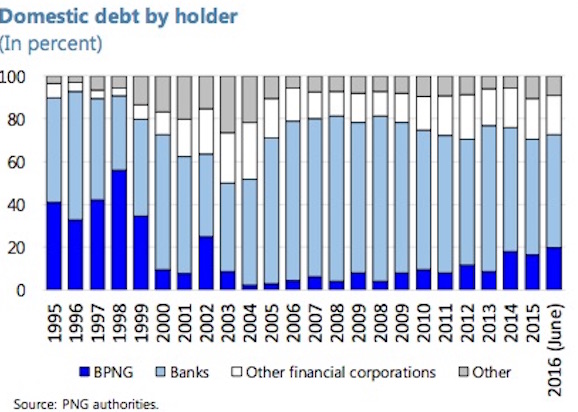 The IMF report says more attention should be given to the deals offered to foreign resources companies. ‘Fiscal revenues from the resource sector may not improve significantly unless the government avoids granting tax holidays and concessions for subsequent resource projects,’ the IMF report (Article IV Consultation) says. ‘Papua New Guinea is a resource-rich country with significant potential, facing daunting challenges.’

The IMF report paints a picture of a government under pressure. Foreign currency is flowing out of PNG because of the cessation of the PNG LNG project and the Government is struggling to finance its deficits.

‘Government  securities auctions have been  undersubscribed and financing costs have increased,’ the report says.

The IMF report claims a five-year US$500 million syndicated bank loan will ‘likely finance the budget deficit in 2016’. It says that, market conditions permitting, a debut sovereign bond issuance for US$500 million is now planned for 2017.

The report says the public debt-to-GDP ratio is expected, by 2021, to decline to just under 30 percent of GDP, in line with the legislated limit.

The IMF report acknowledges that the Government is making the necessary adjustments, but says it should not be overdone. It says the ‘pace of fiscal consolidation’ should be carefully calibrated ‘to avoid a sharp contraction’.

‘On the expenditure side there appears to be ample scope to improve efficiency.’

‘The 2017 budget strikes an appropriate balance between the need to maintain debt sustainability and avoiding an economic contraction.

‘Over the medium term, the authorities will need to specify the revenue and expenditure measures they will implement to achieve the targeted reduction in the fiscal deficit.’

On the expenditure side there ‘appears to be ample scope’ to improve efficiency, particularly for capital expenditures by provincial and district governments. On the revenue side, the report suggests improving tax collections by modernizing the Internal Revenue Commission.

The picture that emerges is of an economy in need of flexibility. The report argues that although the National Government is responding to that need, more is needed.

One requirement is to establish a Sovereign Wealth Fund (SWF) to balance the dependence on overseas capital. ‘With the legislation to establish the SWF now in place, the SWF should be operationalised as planned in 2016, even though little is expected to be saved in the near term under the current contribution rules and conditions.

‘Many of the foreign exchange problems are the result of foreign investment outflows related to resources projects.’

‘The Treasury Department is working on the establishment of a SWF for PNG, including the formation of the board, while the Bank of Papua New Guinea is examining possible models for the setting up of an administrative secretariat.’

The most important area of flexibility is currency management. The IMF report says many of the foreign exchange problems are the result of foreign investment outflows related to resources projects.

‘Between 2010 and 2012, foreign exchange supply was abundant due to partially sterilised inflows associated with the PNG LNG project construction phase, and strong commodity prices.

‘The IMF report describes the banking system as ‘sound and profitable’.’

‘This upswing reversed in 2013, as foreign direct investment inflows declined, commodity prices fell and the subsequent increase in LNG exports was not matched by increased foreign exchange inflows.’

The report says the Kina has remained ‘overvalued’ against the US dollar.  It says the Bank of PNG should permit greater flexibility in the exchange rate.

The IMF report describes the banking system as ‘sound and profitable’, despite the financial sector being ‘shallow.’