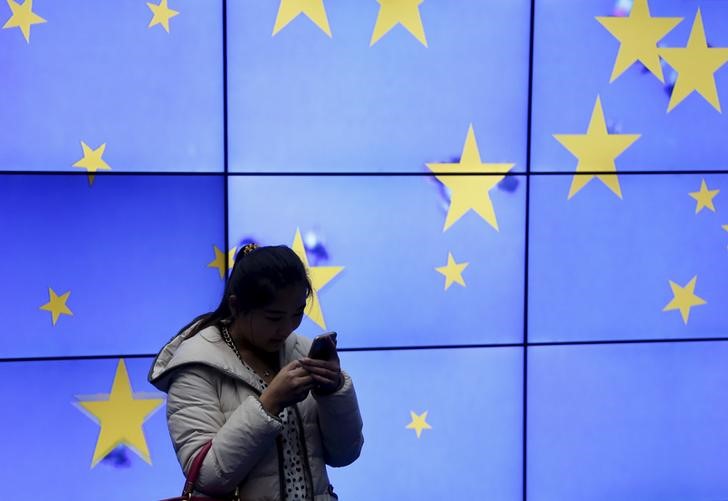 Image: A visitor uses her mobile phone in front of an electronic board in the atrium of the European Council building in Brussels, Belgium, February 2, 2016. REUTERS/Francois Lenoir/File Photo

BRUSSELS (Reuters) – The European Commission will in the coming days adopt rules on how much EU citizens can use their phones while travelling abroad in Europe without paying extra after June 2017, when roaming charges are set to be abolished.

The culmination of a decade-long campaign by Brussels to show citizens it works for them, the end of mobile roaming charges has been beset by delays as the European Union sought to strike a balance between operators defending profits and consumers fed up with what they see as unjustified charges.

However, to avoid knock-on effects on domestic prices given big discrepancies across the bloc in prices and consumption patterns, the EU had to define “fair use” rules to ensure consumers did not abuse the end of roaming by buying cheap SIM cards in one EU country and using them permanently elsewhere.

Member state representatives on Monday voted on the fair use proposals put forward by the Commission, meaning they can be formally adopted in the coming days.

Under the proposals, consumers with unlimited data or very competitive packages will face limits on how much they can surf the web while travelling within the EU.

“We are convinced that our proposal strikes the right balance and bridges very different, often opposite views,” Ansip and fellow digital commissioner Guenther Oettinger said in a statement.

Member states officially gave no opinion on the fair use proposals as there was neither a majority for nor a majority against – meaning the Commission can choose whether to adopt a proposal or not.

Operators will also be able to ask regulators for permission to apply roaming surcharges after June if they stand to lose at least 3 percent of mobile revenues when providing “roam like at home”.

The EU still needs to agree on caps for the wholesale charges operators pay each other to keep their respective customers connected when abroad in order for retail roaming charges to be abolished in June.

Member states have been sharply divided on where the caps should be set.

Countries in the tourist-magnet south favour higher caps to compensate their operators for handling extra tourist traffic, while those in northern and eastern Europe are pushing for them to fall to avoid operators having to raise prices in their home markets.