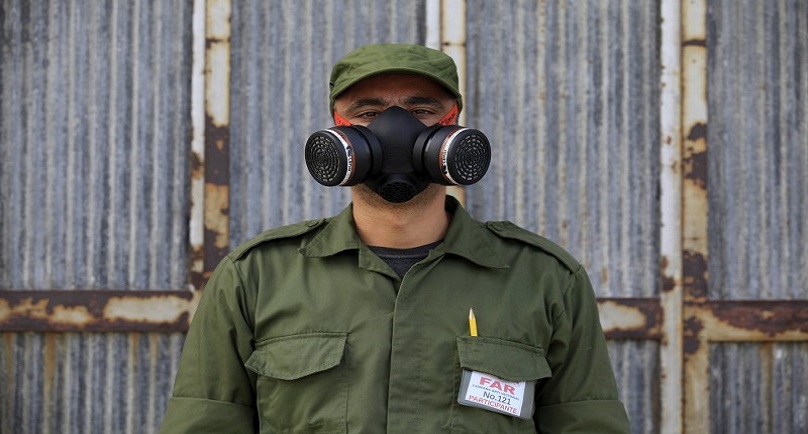 Image: Eloy, 38, a Cuban military reservist who is working in a fumigation campaign against Aedes aegypti mosquito, posses for a picture in Havana February 22, 2016. REUTERS/Enrique de la Osa

HAVANA (Reuters) – President Raul Castro called on all Cubans to help eradicate the mosquitoes that carry the Zika virus on Monday and ordered 9,000 army troops to help stave off the disease.

Cuba has yet to detect a case of Zika, but the outbreak is affecting large parts of Latin America and the Caribbean and is likely to spread to all countries in the Americas except for Canada and Chile, the World Health Organization (WHO) has said.

“It’s necessary for every single Cuban to take up this battle as a personal matter,” Castro wrote in a national message sounding the alarm over Zika, which is carried by mosquitoes that transmit the virus to humans and which is suspected of causing birth defects after infecting pregnant women.

Cubans should clean up potential environments for the Aedes genus of mosquitoes, said Castro, who also is general of the armed forces.

He ordered 9,000 active-duty officers and reserves plus 200 police officers to join the effort.

Military reserves were out on the streets of Havana’s Cerro district on Monday, knocking on doors and fumigating homes. People appeared cooperative as they gathered on corners waiting for the fumes to clear.

“We are fighting by using the public health system so the Zika virus does not attack our country,” said Cristina Suarez, a mechanical engineer and military reservist mobilized for the campaign.

The ruling Communist Party and the government have adopted a plan under the direction of the Health Ministry to deal with Zika that will also help combat the mosquito-borne diseases dengue and chikungunya, Castro said.

One Health Ministry employee, who asked not to be identified because she was not authorized to talk with journalists, said the country’s vast network of neighborhood doctors and clinics were watching for Zika symptoms and that suspected cases would be quarantined in hospital wards prepared for an eventual outbreak.

“There are no confirmed cases yet but there will be. To date there have been two suspected cases that turned out negative,” said the employee, who has real-time access to epidemiological data.

The WHO declared the outbreak an international health emergency on Feb. 1, citing a “strongly suspected” relationship between Zika infection in pregnancy and microcephaly, a condition marked by abnormally small head size.

However, much remains unknown about Zika, including whether the virus actually causes microcephaly.

Scientists are also studying a potential link between Zika infection and Guillain-Barre, a rare neurological disorder that can weaken the muscles and cause paralysis.

There is no vaccine or treatment for Zika.