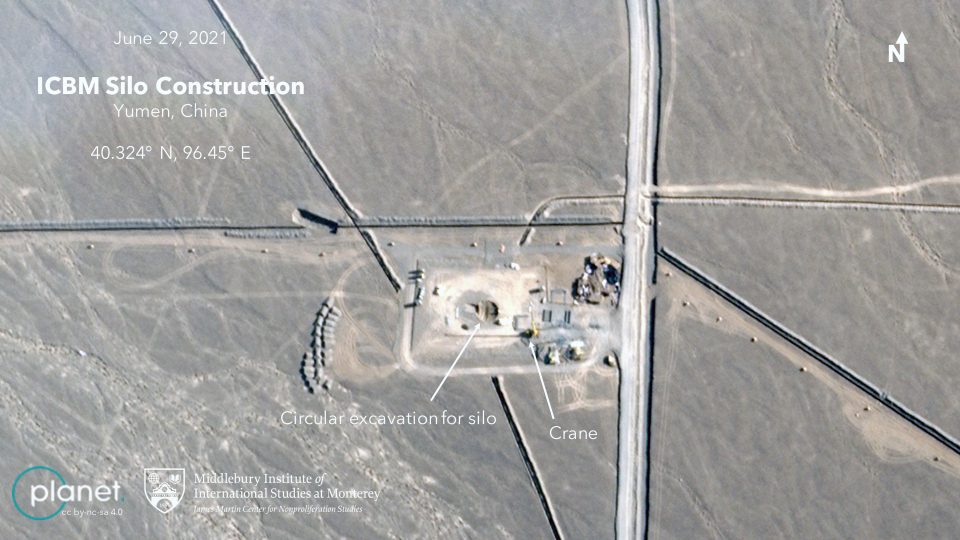 U.S. researchers have identified the construction of 119 international ballistic missile silos in a desert in northwestern China, indicating that the country is carrying out plans to strengthen its strategic nuclear capability.

The researchers spotted the construction in commercial satellite images of remote areas west and southwest of the city of Yumen, on the edge of the Gobi Desert in Gansu province.

The images show circular excavations, long trenches for communications and surface structures consistent with control centers and silos at other launch sites in China, according to Jeffrey Lewis, an expert on China’s nuclear program with the James Martin Center for Nonproliferation Studies at the Middlebury Institute of International Studies in Monterey, California.

“It was a recognizable design,” he said in a telephone interview. “It’s hard to imagine it’s anything else.”

The silo construction is likely to fuel debate in Washington over the Pentagon’s plans to modernize the U.S. nuclear arsenal. It may also be driving efforts by the Biden administration, like the Trump administration before it, to bring China into strategic arms control negotiations that have until now involved only the United States and the Soviet Union and Russia.

“This buildup — it is concerning,” the State Department’s spokesman, Ned Price, said when asked about the construction, which was reported earlier in The Washington Post. “We encourage Beijing to engage with us on practical measures to reduce the risks of destabilizing tensions.”

China has refused to join arms control talks, arguing that its nuclear arsenal is far smaller than those of the world’s two major nuclear powers. At the same time, it has pursued a broad modernization program that has raised questions about its intentions.

China has approximately 350 nuclear warheads, compared to the United States with 5,550 and Russia with 6,255, according to the Stockholm International Peace Research Institute, an independent research organization that tracks strategic stockpiles.

China’s most recent defense strategy, released in 2019, said it would keep “its nuclear capabilities at the minimum level required for national security.” It has also vowed not to use nuclear weapons first or against any non-nuclear state. China’s foreign ministry did not immediately respond to questions about the site.

The silo construction is not unexpected, although the speed and the scope of it surprised the researchers who studied them. In April, the commander of U.S. Strategic Command, Adm. Charles A. Richard, appeared to hint at the development when he told a congressional committee that China was expanding its missile silos “on a potentially large scale.”

The Pentagon’s latest report on China’s military forces, released last fall, estimated that China maintains “an operational nuclear warhead stockpile in the low-200’s,” including about 100 intercontinental ballistic missiles. The report said that China intended to strengthen its “nuclear triad” of strategic weapons that would allow it to launch nuclear weapons from land, sea and air.

“These developments and China’s lack of transparency raise concerns that China is not only shifting its requirements for what constitutes a minimal deterrent, but that it could shift away from its long-standing minimalist force posture,” the Pentagon’s report said.

The researchers in Monterey said China began construction on the site last year, not long after its newest intercontinental ballistic missile, the DF-41, debuted at the 2019 military parade in Beijing celebrating the 70th anniversary of the founding of the People’s Republic of China.

Although the DF-41 is designed for mobile launchers, the Pentagon reported that China was aiming to base some of them in underground silos. The work at the site accelerated in February, Lewis said.

In February, the Federation of American Scientists reported the expansion of silos at a military training site near Jilantai, about 600 miles to the east in Inner Mongolia.

The Yumen site’s design does not necessarily mean China intends to deploy another 100 missiles there. Instead, it could reflect a strategy the U.S. considered in the 1970s in which a fewer number of missiles are moved among a larger network of silos like a “shell game,” making it harder for an adversary to destroy them in a first strike.

“It’s obviously potentially a very significant increase,” Lewis said, “and I think that’s going to have a pretty big bearing on debates about the U.S. ICBM replacement and missile defense and other programs.”

Pizza by drone: unmanned air delivery set to take off in New Zealand