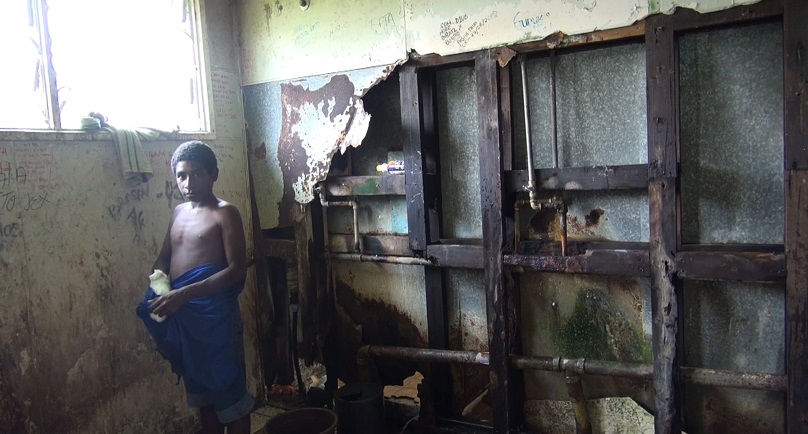 A centrepiece of Wewak’s History, Boram Hospital, is in a state of disrepair.

Patient’s ablution blocks are filthy and unhygienic and the hospital’s walls and floors are decaying.
Although the hospital has been renovated to some extent, key areas are becoming unusable. Slowly, the deteriorated areas of the hospital are falling apart.
Senior staff members say the hospital needs serious help, especially the toilet facilities which show the extent of the hospital’s problems.
Patients who use wheel chairs have to manoeuvre around the place and use filthy pots.
Hospital walls have decayed away over the years and there are gaping holes that expose the women patient’s bathrooms on the other side.
“The toilets and shower are in a bad state and the wards are rundown,” explains senior lab technician Lawrence Avi.
The dressings used on wounds and other materials lie in the shower area. There has been gradual decline in the hospital’s infrastructure.
The wards are rundown and most of them, built many years ago, have deteriorated.
Around the hospital, there are the signs of aging. Some parts of the hospital have been renovated but it hasn’t been enough.
Specialist areas such as the x-ray section are struggling to cope. Robin Gawi is the officer in charge of x-rays at Boram Hospital.
Like much of the other hospital staff, he has been working at the hospital for over 20 years. He explained the need for a specialist portable medical x-ray needed for the examination of bedridden patients in need of surgery.
“The portable x-ray is used when a patient is in operation; they can’t be moved and the surgeon needs x-rays done on a body part before he continues, that’s how important the machines is,” says Gawi.
Wewak’s Boram Hospital, like many other major hospitals in the provincial capital, faces an uphill battle.
In Morobe Province, Lae’s Angau Hospital has had much attention over the years, forcing Prime Minister Peter O’Neill to visit the hospital on many occasions.
The government is now reconstructing it after the controversial Manus asylum seeker ordeal.
previous post