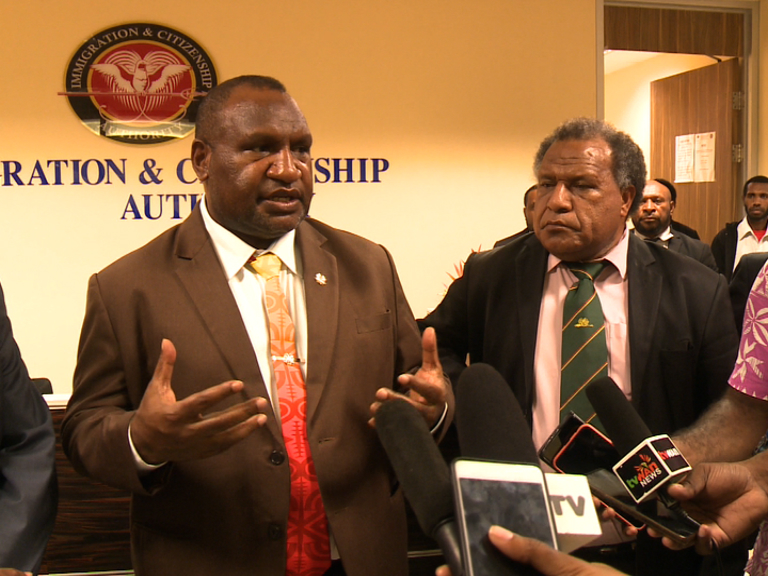 Tougher penalties will be imposed on illegal migrants operating in the country, as well as those involved in illegal activities.

Prime Minister James Marape said this during a visit to the Citizenship Authority along with the Ministry of Immigration and Border Security yesterday at Central Government House in Port Moresby.

The Prime Minister added that fines up to K10,000 will be charged and illegal migrants will have to pay for their own deportation fees back to their respective countries, otherwise they will serve prison time at Bomana Prison.

“Warning to all illegal immigrants in our country, we will slap you with a K10,000 fine, lock you up and if you cannot pay your own ticket then you serve time in our prison, in our country”, he said.

Minister for Immigration and Border Security, Wesley Nukundj, said his office is working to establish a taskforce to pin those operating illegally and deport them to their countries.

“We’re setting up a taskforce team to weed out those who have entered the country illegally or those who are in the country and are engaged in illegal business and jobs that are reserved for Papua New Guineans”, said Nukundj.

The Prime Minister’s visit was part of a routine plan visit to government departments; he added that this was to ensure a flatter structure of communication between departments instead on the hierarchical structures followed in previous years.

“I want to have a flatter structure of doing business in our country, too many hierarchical structures that sometimes the structures become impediments in itself in the way information is relayed and functional alignments are made” he said.

He also commended the staff for ensuring that visitors entering the country are genuine and that the borders are protected.

“Immigration may seem a small agency of state but it’s a very important department in the front-line of ensuring that visitors we have in the country are lawful visitors and ensuring that working in partnership with customs, our borders are kept safe” he said.

Faithfuls called upon to Unite in Prayer

Women rise against violence on their National Day