AS part of the Southern Highlands Provincial Government’s economic empowerment and creating wealth policy, more than 200 bags of potatoes were distributed to farmers throughout the province today in Mendi.

The first lot of 200 bags from the 1000 bags of seedlings purchased from Innovative Agro Industry at a total cost of K200 000 was distributed today in Mendi and that also marked the officially launching of the project throughout the province. 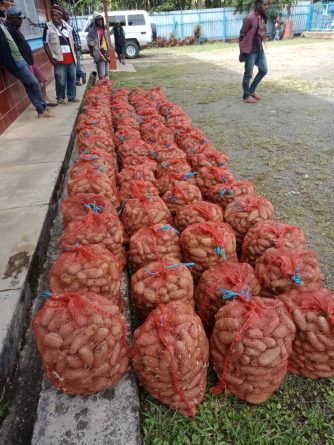 The Provincial Administrator called on the huge crowd that gathered to witness the launching and distributing of the seeds in Mendi to go and tilt the land as the Provincial Government under the leadership of William Powi will provide seedlings, fertilizers, insecticides and also trucks to load this Potato to the new factory in Pangia.

The seeds were special breed Santana potato imported from Israel and produces high quality potatoes.
Cajetan told the people that it was time to go back and till the land.

In 2019, the Southern Highlands Provincial Government under the leadership of Governor William Powi initiated the potato farming as a wealth creation and economic empowerment policy that would liberate his people from the saddles of poverty and oppressiveness.

Powi said he saw potato farming as a major cash economic for his people besides coffee and other smaller cash crops thinly spread over a few places so in line with the Marape-Stevens government manifesto of taking back the country and making it is a rich black nation, his government prioritized the potato farming in the province after partnering with the Innovative Agro Industries to set up a potato chip factory in the province in Pangia where the potatoes can be sold.

Powi said he wanted to empower his people and create wealth for themselves and not to wait for free cash handout or become labours of others.
He said the provincial government has appropriated K10 million, (K2 million each to each of the province LLGs.

Powi said he was happy to announced the launching of the potato farming policy in Mendi with the distribution of the seeds led by the Provincial Executive Council members and the provincial administration.

He said the recent success story of Wesley Ton, a potato farmer from Semin village, Nembi Plateua LLG in the Nipa Kutubu district who has produced 200 bags of potatoes and sold them to the Pangia chip factory and earning more than K16 000 is the catch for the people to go into the potato farming.

Ton in an interview said that he bought 28 bags of seedling from Surunki at the Surunki Innovative Agro Industries in the Lagamp Porgera district of the Enga province last year and transported them to his village and planted. 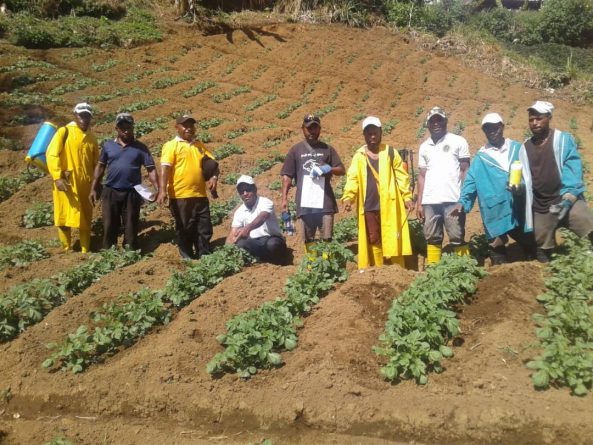 He said it took almost 12 weeks to yield and he would harvest the next 100 bags in two weeks and that would bring a total of 200 bags of potatoes to be supplied to the factory in Pangia.

Meanwhile the provincial Government would purchase 17 big vehicles for each of the 17 of 20 LLGs in the province to transport potatoes to the factory in Pangia.