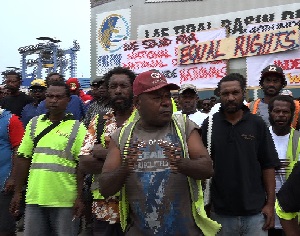 Lae Maritime Workers Union members staged a peaceful protest today against a decision made by PNG Ports to invite a foreign company to handle operations at the international terminal.

The majority of workers are Ahi, Lae’s traditional landowners, who have called on the Prime Minister, Peter O’Neill, to intervene and stop the decision.

The peaceful protest was held at the front gate of Lae’s PNG Ports Corporation at around noon today.

Workers were frustrated, and walked off the job to gather and draw attention to their plight.

They said their jobs are at risk because of the corporations decision, their families are likely to suffer and the decision is unfair.

Maritime workers have come out strongly against the foreign company.

They also said the company invited cannot take their job security in their own land.

Workers told EMTV that when a foreign company takes over the international terminal, local machinery and manpower would be put out of work.

PNG Ports Corporation is expected to make a response to the peaceful protest.

400 boxers to compete in NationalBoxing Championships this weekend