The commercial potential of PNG’s galip nut could soon be realised. Helen Wallace, Project Leader at the Transformative Agriculture and Enterprise Development program tells Business Advantage PNG that the strong growth in the nut industry indicates it is the right time to develop the sector.

The galip nut (Canarium indicum) is indigenous to Papua New Guinea’s islands, including New Ireland, New Britain and Bougainville. It is a protein-rich nut with similar properties to an almond.

The nut sector has a predicted global annual growth rate of more than 5 per cent for the forecast period of 2016 to 2020.

‘We have an increasing world population and with people interested in healthy snacks, now is a great time to build an industry around the galip nut in Papua New Guinea.’

Funded by the Australian Centre for International Agricultural Research and Australia’s Department for Foreign Affairs and Trade, the project seeks to outline best practice for developing the industry in the region.

A similar study in Vanuatu resulted in the galip nut growing into a thriving industry.

‘The project team will expand trials to Port Moresby in early 2018.’

Wallace says there are more resources available in Papua New Guinea and the potential for success is significant. She says the next step is for private investors to engage in the development of the sector.

‘To ensure the industry is sustainable, we need to see investment from the business community,’ she says.

Limited market testing has been ongoing in East New Britain, and the project team will expand trials to Port Moresby in early 2018. 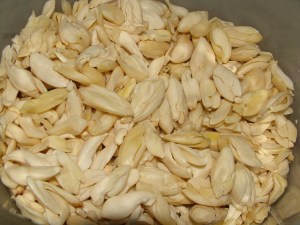 Wallace says the trial factory can’t keep up with demand and the products have been selling off the shelves almost immediately.

There is the potential of a 1000 to 2000-tonne industry. Wallace says the economic impact would be significant.

‘We are creating another income stream for local people. The farmers we have worked with are excited and keen to remain engaged.’

The long-term aim is to scale the project out, and the research team hopes to position Papua New Guinea’s galip nut industry as a player in the global export market within the next five-to-10 years.

Wallace says the key to success for Papua New Guinea is to not let the opportunity go overseas.

‘I would hate to see the nuts put on a ship and sent overseas to be processed. Papua New Guinea has all the skills and capacity to do the work in-country,’ Wallace says.

‘It’s important we position this as a premium product.’

While there is no doubt that farmers and entrepreneurs are keen to engage in the industry, Wallace says it is critical to ensure the quality of the product remains high, which could be a challenge.

‘It’s important we position this as a premium product. We can’t afford to have bad quality product going into the market.’

Decentralised processing is required to scale the project up, but this can lead to challenges when trying to keep the quality of the product high, Wallace says.

Access to reliable power could also be an obstacle for the industry, with power needed to dry the nuts.

The team has developed a solar-assisted drier that can dry four tons of product in a week with a small two kilowatt heating element and passive solar heat.

While access to transport is also important, Wallace says the advantage of nut products is that you can dry and store them until you are ready to move them.

‘The next step is for investors to work with us to develop the commercial potential of the galip nut, with the support of our research.’

Three workers injured in accident at Kia plant in Mexico