There are compelling reasons to boost Papua New Guinea’s agriculture sector, according to Ilan Weiss, Chairman of Innovative Agro Industry. It can reduce reliance on imports and provide jobs to a country full of dedicated farmers.

The reason to get involved in agriculture in Papua New Guinea is the PNG people themselves, according to Ilan Weiss, Chairman and Executive Director of Innovative Agro Industry (IAI).

‘You can try and engage a Papua New Guinean on any subject on any matter and they may be interested or not, just like anyone else.

‘But you mention agriculture to a Papua New Guinean and their eyes light up,’ he told the Business Advantage PNG Investment Conference in September.

‘They automatically engage. The reason is that Papua New Guineans have been doing agriculture for far longer than Europeans. It’s something dear to their hearts.

‘They are very open to innovation and you find good farmers everywhere.’

IAI has been operating in PNG since 2011, developing modern and innovative vegetable and poultry product centres, a frozen vegetable processing unit in Southern Highlands and its latest venture, a dairy production farm at Ilimo in Central province. 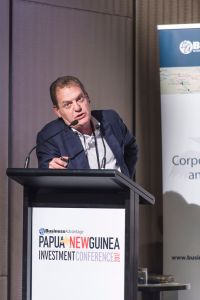 The farm has 175 hectares of cultivated land producing stock feed for 500 milking cows and a dairy processing plant, capable of producing 12,000 litres of milk per day.

Weiss describes pricing of dairy products in PNG as ‘ridiculous’.

‘This is a grass to glass farm. We aim to bring prices down.’

Weiss says when IAI came to PNG, they found that despite PNG’s natural agricultural advantages, good climate for a variety of produce and excellent water resources, the country was largely dependent on imports to feed its people.

‘All those imports are sold in PNG at much higher prices than they are sold in the developed world. But that’s changing.

The company’s first project, the 9-Mile farm outside Port Moresby, is producing 10-15 tons of vegetables weekly. Weiss says demand was such that ‘we had to stop exports in March and concentrate on the domestic market’.

Lydia Tasi, Crop Control Manager at 9-Mile Farm, sees agriculture as the way out of poverty for most Papua New Guineans.

An aspiring politician, she came from a subsistence farming family in Wewak in East Sepik Province. She turned to education as the only way out of poverty.

‘I became a village girl again. I went back to growing food, fishing, harvesting for sago.’

But the reality of the PNG agriculture hit after she returned home, having got a Bachelor’s degree in Agriculture in New Zealand, under a New Zealand government scholarship.

‘I came back home, but there was no agriculture industry in Wewak. So I was jobless for two years.

‘I became a village girl again. I went back to growing food, fishing, harvesting for sago. What a waste—to go to university and not get a job. So I decided I had to go to Port Moresby for a job.

‘I heard about IAI so I applied and they took me on board. I was working in the packing house where I saw the different technologies they brought into my country.

‘We know only how to do traditional farming. But these new technologies meant we could grow different fruit and vegetables using irrigation and I was thinking “wow”.’

Tasi told the company she felt she needed to get a Masters.

‘They told me there is a place for you in the company after you finish your study. Again, the NZ Government sponsored me for my three years’ Masters at PNG University of Technology.’

‘The agriculture sector is not doing enough.’

After completing her studies, Tasi returned to IAI where she has special responsibility for irrigation at 9-Mile Farm. Production is done in a climate-controlled environment, using drip irrigation and computerised crop management systems, which is the backbone of efficient water and energy usage.

She laments the poor state of PNG agriculture, despite its potential.

‘We have only two universities in the country specialising in agriculture and every year about 60–70 students graduate but only 10–20 find work. The rest are jobless.

‘So my passion is to further my career, get my PhD, come back to my country, go into politics and in the agriculture sector.’

‘We need to go into mass production of foods throughout the country. Why are our mortality rates so high? Why do we have security problems? It’s because the agriculture sector is not doing enough.’