An increase in the number of protests, blockades, and inter-clan rivalry in Papua New Guinea poses ‘downside risks’ to Papua New Guinea’s economic growth recovery, according to a report by BMI Research, a subsidiary of the Fitch Ratings Agency. It warns it could lead to delays or cancellations of investment projects. 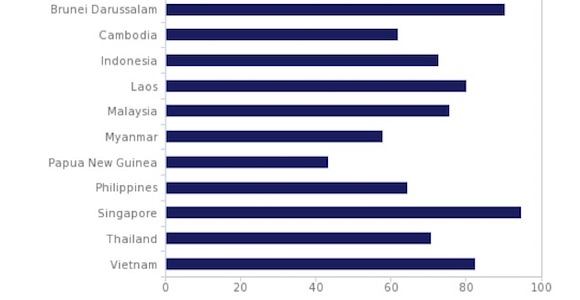 BMI’s Short-term Political Risk Index (out of 100). According to BMI Research, PNG has the worst risk rating out of 11 in the South East Asian economies listed. Source: BMI Research

‘Although the country boasts lucrative investment opportunities in the LNG sector, the heightened political risks are starting to deter investors, possibly leading to more delays and cancellations of planned investment projects,’ the BMI report says.

‘In our view, these social unrests are unlikely to abate any time soon.’

‘We believe that the increase in frequency of protests, blockades, and infighting between tribal clans in Papua New Guinea over royalty payments of resource projects pose downside risks to our economic growth forecast of 2.7 per cent for 2017, and our view for the economy to pick up pace thereafter.’

The BMI report says PNG scores a ‘dismal’ 43.3 out of 100 in its short-term political risk index score, making it the lowest of all countries in the region.

‘In our view, these social unrests are unlikely to abate any time soon, and will continue to pose significant project risks and create additional costs for foreign businesses operating in the country,’ the report says. ‘Over the last few years, PNG has witnessed a rise in social tensions and dissent.’

‘Tribal fighting is often due to the lack of economic development and public services.’

The BMI report says a military response to the tensions ‘will not solve the root cause of the problem’. It says tribal fighting is often due to the lack of economic development and public services. ‘Delay tactics can only work for so long.’

The report says protests against the Government over the payment of royalties to landowners in relation to the ‘LNG plant belonging to ExxonMobil near Port Moresby’ have so far been peaceful.

‘The BMI report warns that the high rewards in PNG are not sufficient to retain the interest of foreign investors if the risk becomes too high.’

‘No casualties were reported, but we warn that violence could erupt if the government is not able to resolve the issue over the coming months.’

The BMI report, authored by Asia Analyst Raphael Mok, warns that the high rewards in PNG are not sufficient to retain the interest of foreign investors if the risk becomes too high.

‘The high risks involved have undermined the attractiveness of investing.’

‘Although the high-rewards associated with PNG’s LNG sector means that the country will likely remain the subject of intense interest among a host of international oil companies, the high risks involved have undermined the attractiveness of investing in the country’s resource sector and will continue to do so over the coming months.

‘In January 2017, Oil Search and ExxonMobil surrendered one of their prospective licenses (PPLs) for a block known as PPL277 in the country, citing difficulties with exploration in the Highlands region and other factors.

‘The pair had paid US$15 million (K47 million) in 2012 for the license and had offered further payments to landowners and the PNG government based on the success of their exploration efforts.’

Town of Reduction, population 60, up for sale in Pennsylvania

Industry diversification a must, say ADB and Manufacturers Council