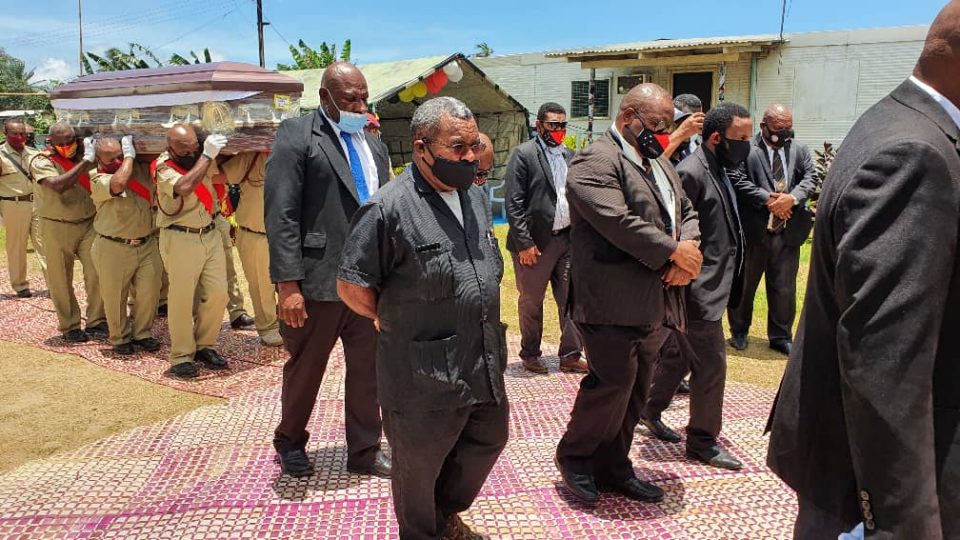 He said this in a brief address at the Fly River Provincial Assembly on Monday, when handing over the body of the late Member to Daru.

Biyama, aged 54, a four-term Middle Fly MP since 2002 and a member of PM Marape’s ruling Pangu Pati, passed away on September 12.

He was farewelled in Parliament last week with glowing tributes from MPs.

PM Marape apologized to the people of Middle Fly, and Western, that he could not take the body home to Balimo.

“On behalf of the people of Papua New Guinea, we would like to pay respect to him (Biyama) for the services rendered to our country,” he said.

PM Marape said he had asked Biyama to rest from his work, after he had fallen ill, but the Middle Fly MP continued to work until his passing.

He said a classic example of this was the recent Porgera landowners’ meeting in Wabag, where Biyama accompanied the Western Governor and South Fly MP to express concern about tailings being dumped into the Lake Murray, Strickland River and Fly River systems.

“This is testament of a leader who worked all the way, and sacrificed himself, for the betterment of his people and his country,” PM Marape said.

“I came here, representing the greater people of our country, to pay respect to this giant of a man; humble as he was whose heart was in the right place, serving his people until his passing.

“We may not adequately fill in the vacuum at his home, his tribe, his district and his province, and his network of friends throughout the country.”

PM Marape passed on the condolences of the ruling Pangu Pati, and on behalf of himself and his family, to Biyama’s family, friends, people of Middle Fly and Western.

Judge warns about “conflict of interest”

Blood Shortage in Mt.Hagen Due to Election Incidents